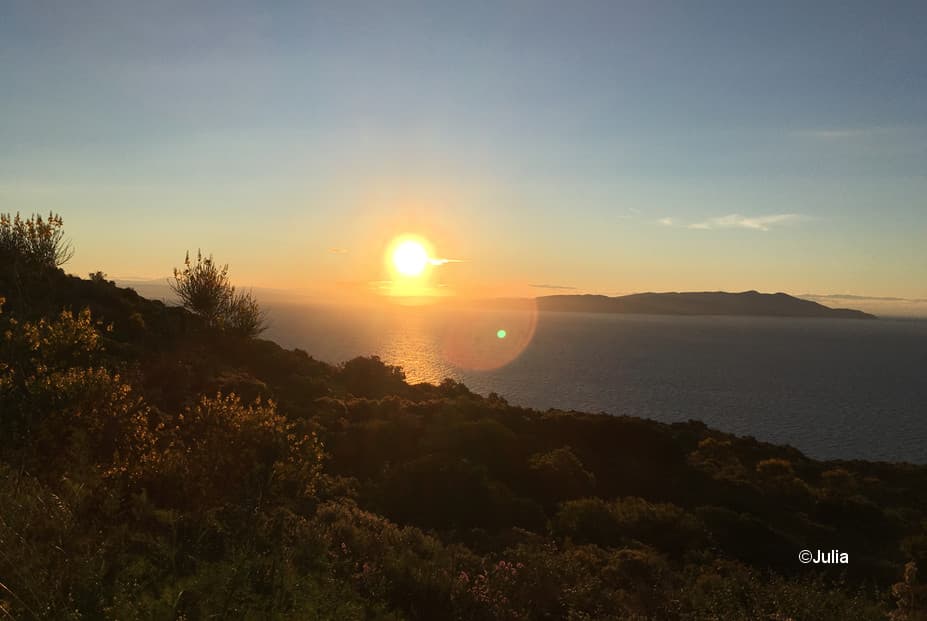 How I got my internship
Hi there, my name is Julia. I started my bachelor in biology 2,5 years ago, already knowing that I want to study marine biology in my masters. To have better chances on being accepted for the master, I decided to do an internship. The IfmB (Institut for marine biology) crossed my path by accident. I just became a part of a working group, when I got an e-mail from Jenny, the head of the IfmB, asking for assistants in the beginning of October 2018. I had some free time left, so I asked her whether I could come to Giglio for an internship and it worked out. I enjoyed my first time on Giglio so much, that I decided to go there again, only this time it should be for 3 months, at least.

Driving to Giglio
And I was lucky again. I wasn’t the only intern form the University of Bremen, two other guys, Milan and Benedikt, joined me. Benedikt has a car and decided to drive to Giglio taking Milan and me with him. Since the way is really long, we made a one-day stop in Bologna. Bologna is one of the biggest Italian cities and has a beautiful old town. After our day in Bologna, we continued our journey to Giglio. To get to the island we had to take the ferry, which takes about an hour. For me, it kind of felt like coming home.

After arriving we first took our luggage into our apartment and then met the others. For me it was really nice to see most of the people from last year again. We all were greeted really friendly and taken into the Giglio family. And because in my home town the first of may is the start of the swimming season, we decided to take a short swim in the sea. It felt like ice water. So if you like to go to Giglio in the beginning of may for swimming, remind yourself to bring a wetsuit.

Our apartment
So for a period of three months the three of us were supposed to share an apartment. At first I was a bit worried, because I live in a single apartment in Bremen and not in a shared flat, but everything worked out eventually. The apartment is located in the basement of an apartment block for summer rentals. So in high season it can get a bit noisy, but at night time it usually is quite enough to have a nice sleep. For sleeping we had two bedrooms: one three-bed-dorm and one four-bed-dorm. Actually you can sleep pretty good as long as no one is snoring and you have a thick blanket, because the nights are actually quite cold in May. From June on the other hand it almost was too warm in the dorms.

You probably already guessed it, we shared our sleeping rooms so of course we also shared two bathrooms and the kitchen. Those we actually shared also with the people working at the diving center and other employees from the Institute. In the second week we decided on taking turns for cleaning. You can imagine with 5 people living in a small place and 5 more coming there on regular basis the apartment could get really messy. So once a week everything had to be cleaned. We put a table on the fridge. We actually got a new one. I was so surprised, when I entered the kitchen the first time, because last year there only was a small fridge, the new one is twice it size and still sometimes it is just too small for all the stuff we get.

You may ask yourself: what stuff is she talking about? And what is the Institute? What was your internship about? Her tasks? No worries I’ll answer all those questions in a second, but first I wanted to talk a bit about food or to be precise about cooking. Once a week, well this depended a bit on how many we were, one was cooking dinner for everyone. So sometimes you had to cook for 7 people and sometimes for 16. I know it can be a huge challenge to cook enough for everyone, but it was okay to cook way too much (makes a good lunch the next day).

The IfmB and my tasks
Now finally the thing you’re really interested in and the main reason why you’re reading this.

The Institute for marine biology is a private institute for teaching and research. Schools from all over Germany, Switzerland and Austria visited us for a week to get to know the marine environment and have some marine biology lectures. A marine biology course consists of four different lectures: the first one is about Echinoderms and getting to know the materials we use. The others are sandy grounds, hard soil and connected worlds, were we give an insight in the connection between different ecosystems. For every lecture the students got animals from us, which they are supposed to identify. And here the tasks for the assistant begins. As an assistant it was my task to prepare the class room and to prepare the animals. In this context preparing means putting the animals into small bowls with fresh salt water, because we only worked with living organisms. In the course I helped the students to identify their animals and to find some more information about their way of living. At the end some organisms were shown beneath the stereo microscope. So as an assistant you had to listen carefully to the course leader and show what he or she was pointing out. It sounds probably more difficult than it actually is, after you tried it two or three times you’re probably able to do it in your sleep. But helping in the lecture wasn’t my only task. There was a lot of preparation to do. Here are some examples: clean the snorkelling area (the area where all wet suites, masks, fines are stored), do the laundry or take care of the animals. Furthermore, we had to guide snorkelling tours in the bay and show the students some interesting animals like moray eels or cuttlefish.

The typical Italian way of life
As you can imagine the workload was quite high, so there was not much free time. To reduce stress I started my day by doing some Yoga at the beach, which was only 200m away from our apartment. Sometimes I would join the others for a coffee at the beach bar. For Italians it is common to drink a “cappo” in the morning and then go to work. Then they work a few hours and take a long break from 1pm to 5pm. Trying to get something, e.g. information or drinks from the supermarket, is nearly impossible in the afternoon. At first this was really confusing, because you went to the supermarket in order to buy something for lunch, but there you had to realise that it is closed. Lucky for us, the supermarket was only 3 minutes away from our apartment. On the other hand, Giglio is a small island and Campese is a small village, so everything is close by. Next to our apartment the Campese Diving Center (CDC) was situated. In our first two weeks we got our diving licenses at the CDC and started to go diving in our free time. But also for our work we had to dive: we had to switch the organisms we used in the course to make sure that they survive. Giglio has some of the most beautiful diving spots in the mediterranean sea. For me the diving was the best part of the internship, well, and meeting so many nice people.

Already the end?
The three months were over in nearly no time, now I’m sitting on my desk at home and think of all the moments I had on Giglio. I’m a little bit sad I couldn’t stay longer, but I’m planning on visiting Giglio and the IfmB again. Perhaps already in October or next year, we will see.
Further interesting information on an internship at the IfmB https://blogs.uni-bremen.de/praxisschock/2018/08/31/erasmus-praktikum-am-institut-fuer-marine-biologie-italien/