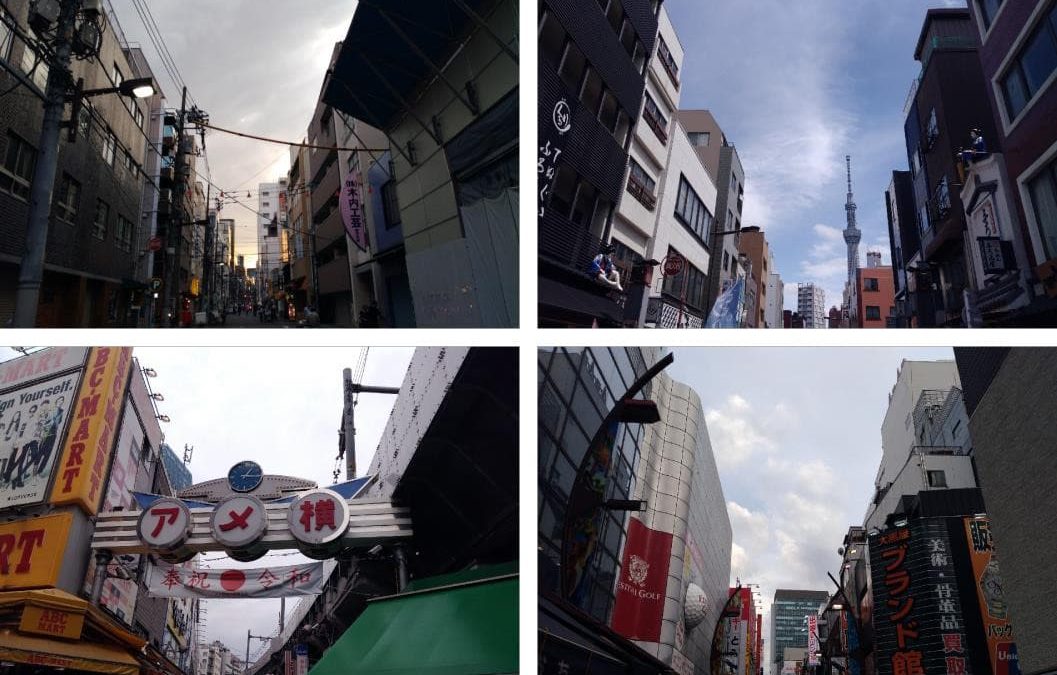 1. Preparations
1.1 Application for the position
There are indeed various options on “what to do” during a graduate study. As I want to learn something in extra, to meet more talented people, as well as to experience another culture, I eventually decided to do an oversea internship. With regard to the destination, I have been interested in Japan and particularly their nature conservation for a long time. And therefore, it became my first choice when there was a chance to have a short-term stay out of Europe.

Thanks to the information from the teachers and also students of the 2017 year, neither the application nor preparation has been too hard for me. In accordance to the PROMOS scholarship, in my plan I put the internship to the first half of 2019. However, there are not as many internship programs as in the summer break. So I asked our professors together with teachers if they know anyone in Japan, and then received a list covering worldwide researchers from Prof. Dr. Bernd Zolitschka, who later became my supervisor for this internship. And by the keyword “geography”, I found Prof. Dr. Yusuke Yomoyama of AORI (Atmosphere Ocean Research Institute) at The University of Tokyo. Thus, I sent an email as inquiry, with my CV and a short motivation letter attached. A couple of days later I got the reply, confirming the possibility. And the stay would be from the beginning of March to the end of May.

1.2 Visa and the funding
Materials for visa include passport, application form, 2 photos taken within 3 months and the COE (Certificate of Eligibility). The English application form can be found from the website of the Japan embassy in Germany. Most importantly, the COE, is required from those who would enter the country for all purposes except tourism, and in my case, it should be applied by the institute. After filling in the application for the intern position in the institute, together with photo and financial proof attached, the institute started the procedure towards the Immigration Bureau of Japan. And I submitted the application for visa to the embassy in Hamburg [Figure 1] as soon as I received the post because their2 embassy accepts hard copy only. After 1 week or so, the visa was granted and I went to Hamburg again to collect my passport. The COE was stapled to the visa itself, and according to the embassy staff, cannot be taken down until I go through the customs in Japan.

AORI, where I would stay for 3 months, is located in the Kashiwa City (Chiba Prefecture) at the neighborhood of Tokyo. Therefore, around EUR 3,000 is needed due to the high living cost, including the round-trip flight. With the help of Mr. Michael Thiele (Faculty 8) and Mr. Mathias Bücken (International Office), I applied for 2 scholarships: PROMOS, along with the Bremen Studienfonds. To be mentioned of, the deadline for the PROMOS application is either 1st March or 1st October, and the Bremen Studienfonds requires a letter of recommendation from the supervisor. Hence, timing is rather important. In addition, my internship goes across semesters, so getting all the documents arranged before departure would be of great help.

2. Arrival
Getting an accommodation from the university student lodge is a bit too expensive as well as inconvenient, because I have to move several times in that case. Fortunately, I got a room from the housing agency Leopalace 21 with a 50%-off price, which was JPY3 182,860 in total and equal to EUR 1,507 plus all the fees. In the meantime, as Alipay is quite a popular platform in Japan, especially in the region (Kanto) where I was going to settle, I exchanged JPY 150,000 only (about EUR 1,230). For the rest, I paid directly with Renminbi (Chinese yuan) in Alipay and the transaction would be automatically counted in real-time currency.

With regard to the flight, I eventually decided to fly from Hong Kong, for that there are better deals, and the airport is within reach of my hometown Guangzhou. When I arrived at the Narita Airport on 5th March, I bought the travel SIM card of Softbank with mobile data for 90 days, plus a “Suica” card that can be used for transportations. I was picked up at the Kashiwa Station in the late afternoon by Ms. Tomoko Shibatsuji and Mr. Junjie Zou of the institute, who offered me a variety of helpful advices ahead of the trip. Before we had dinner, they also gave me a hand in getting the keys for the room and moving in at the end of the day.

3. The internship
At the beginning of the internship, I spent some time on getting familiar with the lab and the surrounding [Figure 2]. When I later met Prof. Yokoyama who just returned from an excursion to Australia, we discussed about the research projects. Basically, the project that I was going to work on is the radiocarbon (14C) dating of water from several lakes located near the Mt. Fuji, and then compare with data in reality or from climate models.

There are overall 43 samples retrieved every month between June 2018 and April 2019 from the Lake Sai, Lake Yamanaka, and the central together with coastal area of Lake Kawaguchi. April 2019 of Lake Kawaguchi center is not available, for the reason that the glass bottle of the sample broke during shipping.

For every step in the lab, the instruction has to be followed carefully. Otherwise there could be danger or damage.

3.1 ICP-MS (Inductively coupled plasma mass spectrometry)
Although the ICP section for the lake water samples haven’t been started, it’s the first experiment that I learnt about in the lab. Elements, most of which are metal, could be detected with a comparatively high accuracy from their reflection to the plasma. In total 21 elements can be measured, and in the experiments involving water, Ca, Na, K and Mg are the main elements.

The samples used in the tests were mineral water from different brands. With a serial dilution of 125, 250, 500 and 1000 ppb, the machine run 3 rounds per set. And after that, the regression line of these 4 sets of sample should be as straight line as the change of dilution. However, there was always a bent-down in practical.

3.2 AMS (Accelerator mass spectrometry)
My concentration was on the AMS experiment because it is a method for the isotope measurements. Generally speaking, what I’ve done can be divided into 3 parts: sample preparation, graphitization, and mass spectrometry.

Preparation began with the assemblage of samples into special equipment [see Figure 3]. Grease was applied to the rings to ensure the sealing. Afterwards, the equipment was vacuumed and put into a pyramid-shaped glove bag. The Ar gas shall be filled inside to prevent C in the air from polluting the sample. In the bag, phosphoric acid (HPO3) was added to the upper flask with disposable droppers, while the seals were opened and the sample attached to the equipment. Moreover, since the Fe powder works as a catalyst for the graphitization, the pre-heating of it with 500 hPa H2 gas would take 1 hour in an environment of 450°C, till there’s no Fe2O3 that consumes H2 in the coming experiment (reduction reaction). For the whole, disposable gloves are necessary as the Hg was5 added to the samples in order to eliminate the growth of bacteria and algae when they were retrieved. 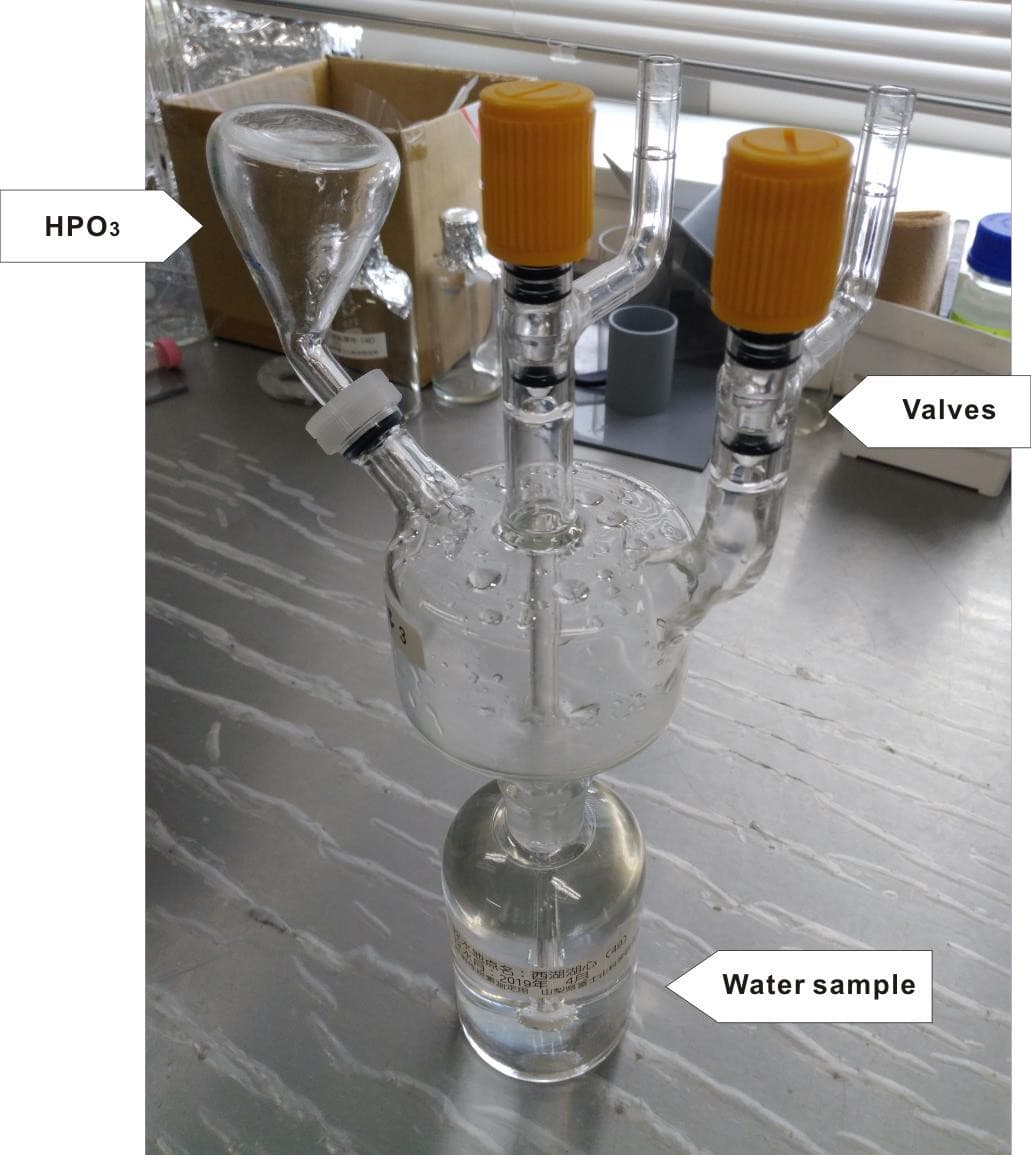 Procedure of the graphitization was as follows:
1) Connect the sample to the piping system.6
2) Build 2 water traps with cooled ethanol (less than -90°C); plus a CO2 trap with liquid N2 [see Figure 4]. 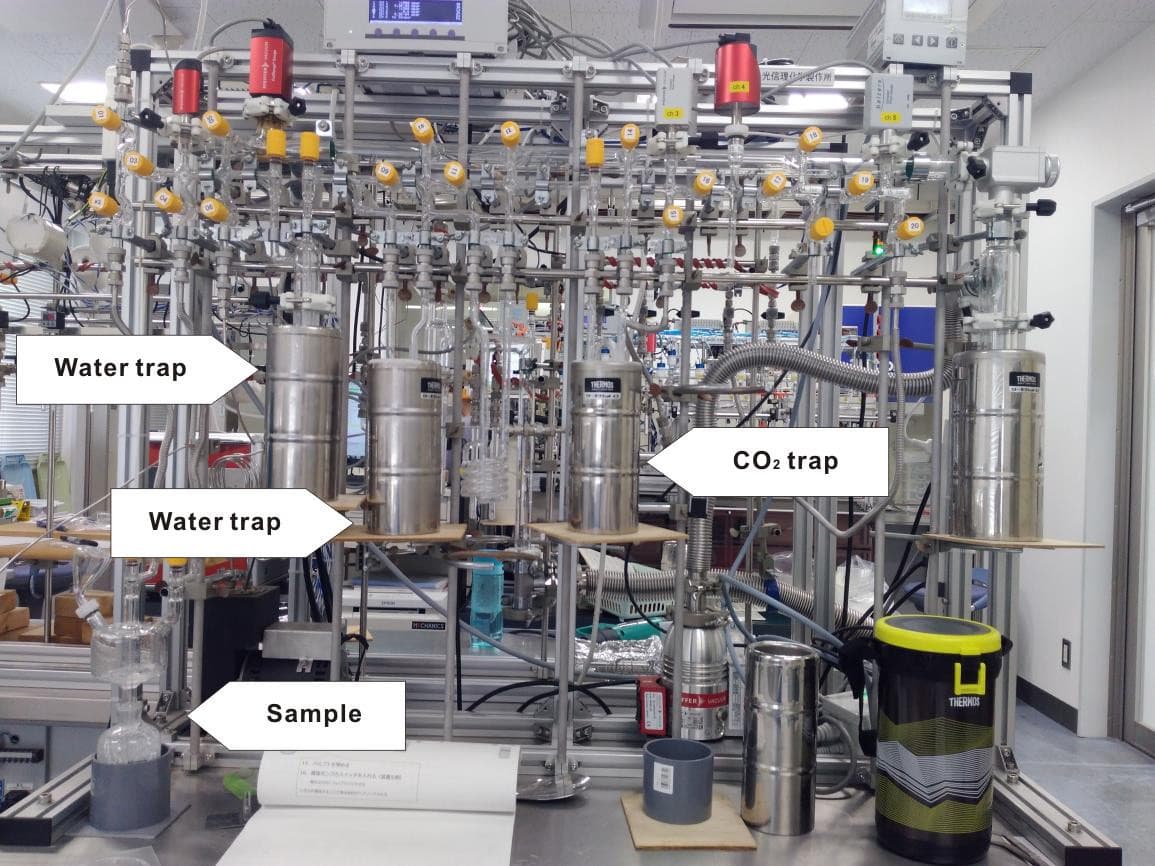 3) Pour the HPO3 in, and turn on the pump for water circulation to obtain CO2 from the sample without other gases
4) Store the CO2 in the end tubes with Fe powder [Figure 5]; fill the tubes with H2 twice as much as the CO2 pressure (2CO2+4H2=C2+4H2O)
5) Start the graphitization with oven temperature 630°C for 6 hours
6) Clean the equipment with wash bottles twice to remove Hg; further apply detergent and flush with Milli-Q water
7) Bake them until fully dry, and then seal them into reclosable bags 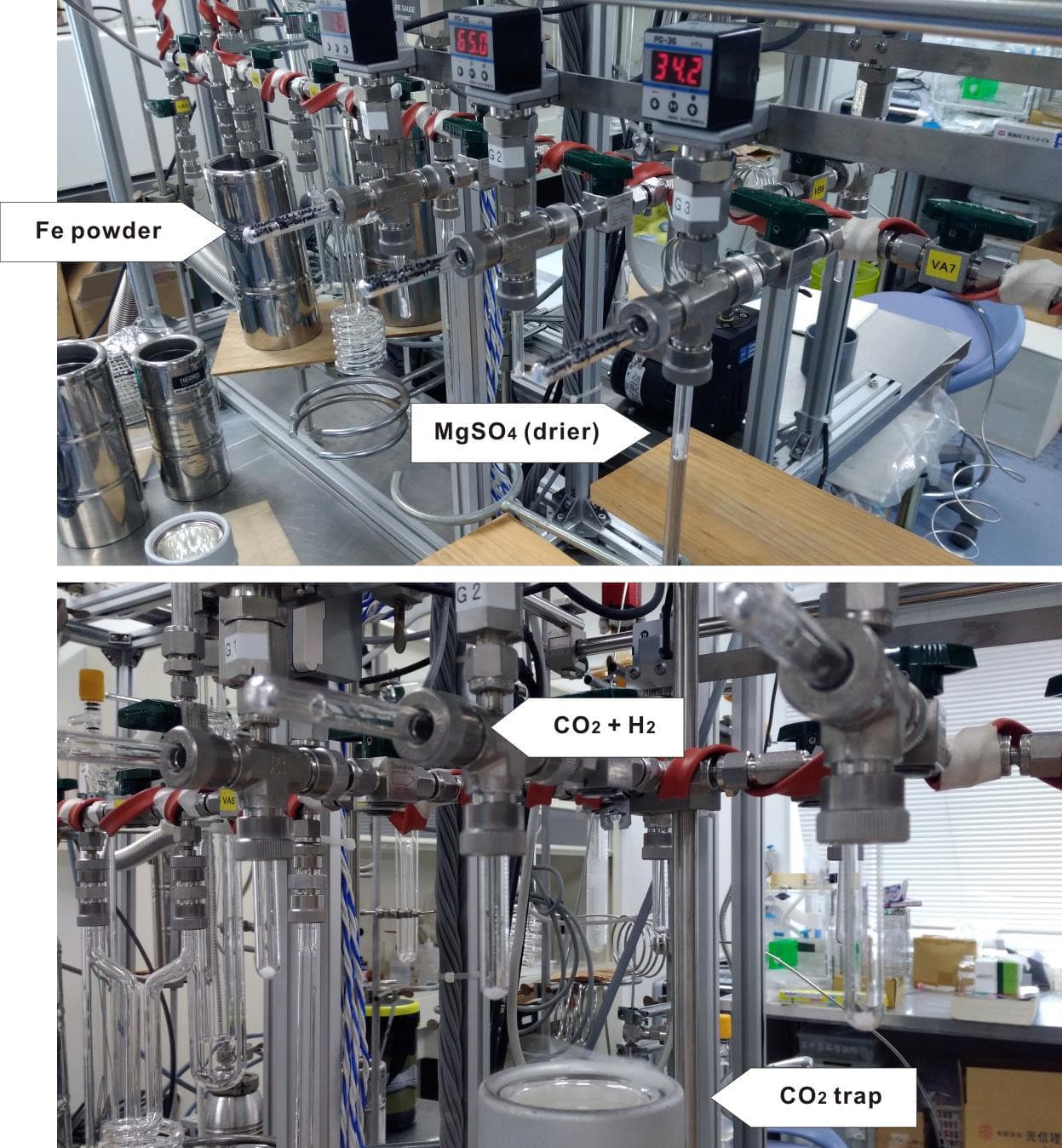 Because of the long waits, the reaction usually took place overnight, so that I could harvest the C the next day. When the C is ready in the tiny tube where the Fe powder originally locates, it can be crushed and pressed into the cathodes [Figure 6]. During the operation, the isolation between each sample is of great significance, or the precision of isotope measurements would be degraded. In the final move, the cathodes were put into8 a disk for the mass spectrometry, and sent to the machine.

As I plan to work on this topic for the thesis, research about the dating and the methods for mass spectrometry will continue after the internship. 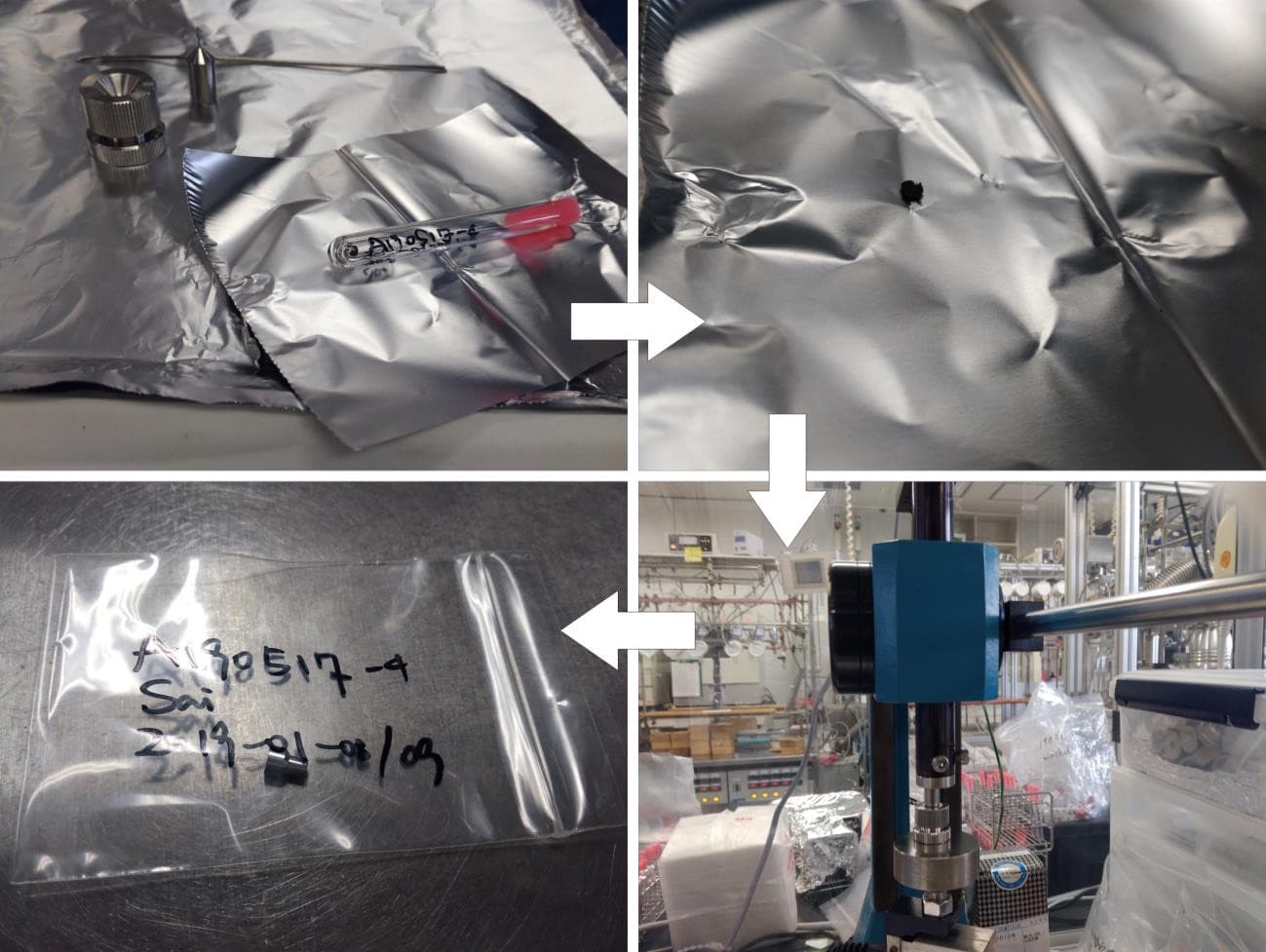 Meanwhile, I took a language course in the campus. Though I didn’t have a systematical study before, I got the basic hang of Japanese rather quick owing to the similarity that my mother tongue shares with it, especially when the “Kanjis” (Chinese characters) are much alike.

4. Experience
Japan is undoubtedly a country of flowers [as shown in Figure 7]. Since I stayed through the spring, I witnessed the blossoming and withering. Also, the weather there is rather9 different from what it’s like in Bremen, which changes a lot between days. As a result, I spent some time in adjusting when I arrived. 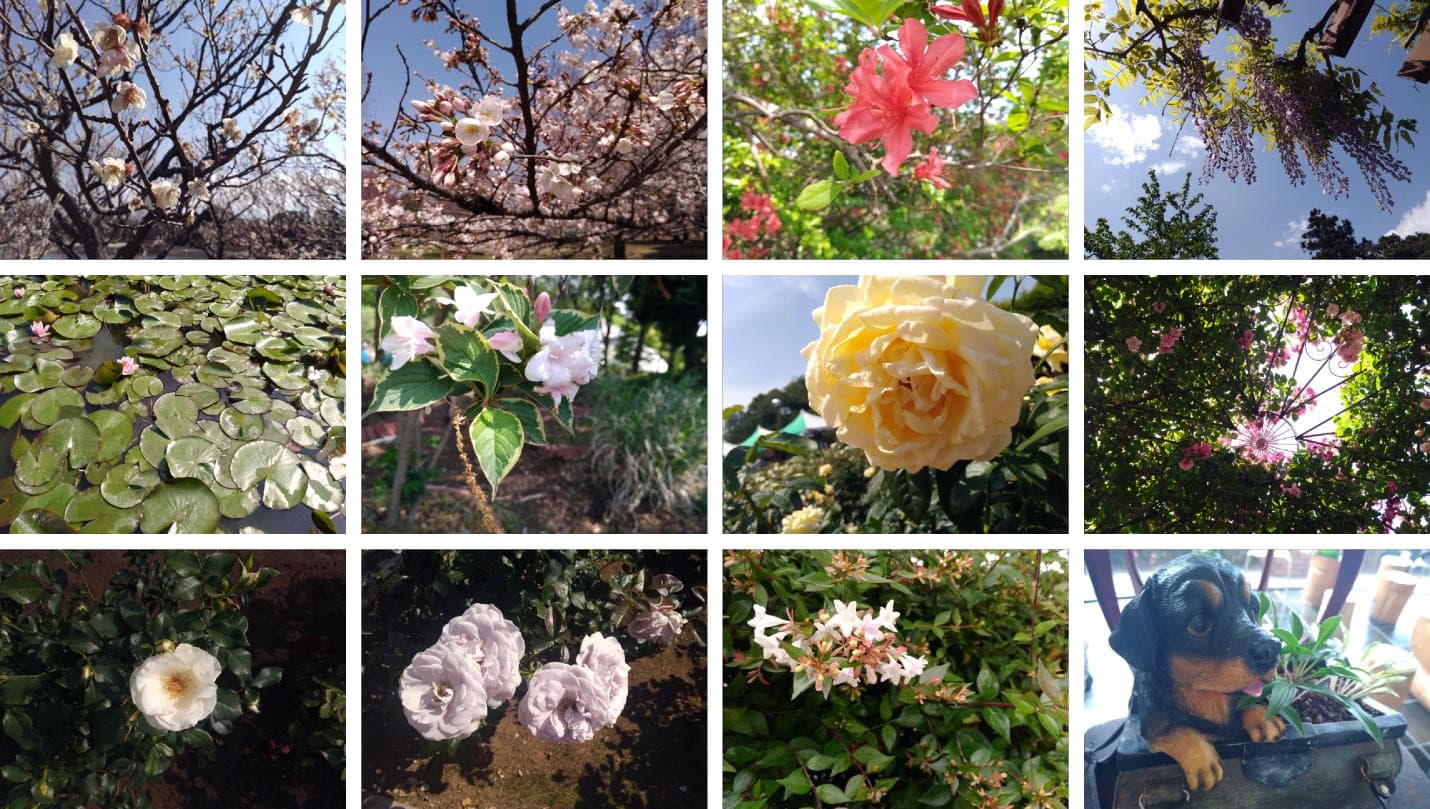 People in the institute gave me much assistance and care, for which I’m very grateful. And they, or to say the people in the country, work really hard. On the other side, the Japanese are famous for overtime and overwork as well. Apart from this, my favorite section about the internship is the lunch meeting every Tuesday, where people share and discuss on the new papers that they have read during the last weeks. Not only has it become a strong driver for reading, but the share of knowledge also helps a lot in the studies. Furthermore, there are many opening days of the institute, and the public as well as the scientists from other region could join us. I got to know more about the latest research thanks to these activities.

As the institute lent me a bicycle, I was able to travel freely to parks, museums and shrines in the vicinity. Besides, although it’s not my filed of expertise, I found the planning of Japan cities and transportation interesting [Figure 8].

In short, to do an oversea internship, it’s important to have a clear plan, because the whole procedure could be complex and time-consuming. The possibility of knowing the10 language in advance would definitely help, as English is not always working. Else is the courage to a new environment. 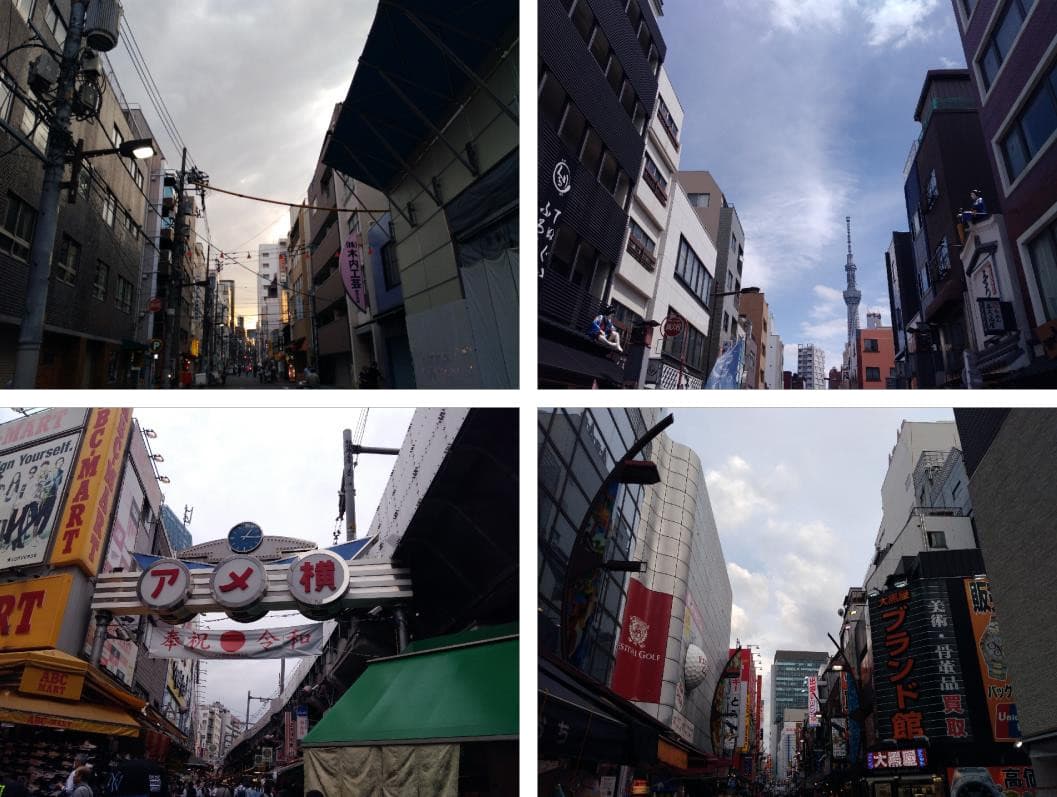 Last but not least, many thanks to the people here in Bremen, especially Prof. Zolitschka, Mr. Thiele, Ms. Katharina Repenning, and the International Office. I couldn’t have made it without the help.
Thank you!