In one of the last articles we introduced you to the principle of computer tomography. The MAPEX at the University of Bremen X-rays objects, analyses and evaluates the results to gain information about material properties. In this new article, we go on a journey through time. We uncover what was hidden in the past, draw conclusions from the present and evaluate the benefits for the future. The shard shows itself in a new digital guise, which, in addition to new possibilities, also harbours risks.

Let us turn again to the example of the clay sherd from the 16th century. Particles with stronger X-ray absorption can be seen in the CT images. With the non-destructive CT methods and the knowledge gained from other scientific work, such as Rother (1992), it is possible to make well-founded statements about the composition of the material. Thus, unlike many chemical analysis techniques, the sherd does not have to be destroyed. The original vessel, of which the sherd is a fragment, is sufficiently known among historians as Siegburg stoneware. 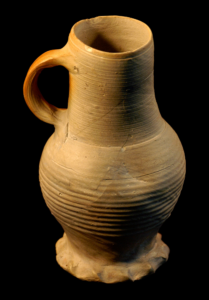 Figure 1: Siegburg jug; made at the end of the 14th century, found near Hamburg in the 20th century.

Stoneware – coveted then as now

The late Middle Ages and early modern times were the heyday of this ceramic ware. Produced in Siegburg in the Rhineland, it was traded throughout Europe and is used today to date archaeological sites.

Decisive for the settlement of the Siegburg potters were rich forest resources for firewood, the good connection to the navigable waterway – the Sieg –  and high-quality clay deposits. A guild regulation not only precisely prescribed how to proceed in production and trade, but strictly allowed only the written types of vessels. These were mainly pitchers and jugs (Dornbusch, 1873).

Due to the strict guild rules, according to which the knowledge of the potters could only be passed on to sons born in wedlock, the Siegburg stoneware production was firmly in the hands of a few families for centuries (Dornbusch, 1873).

In order to allow the destitute citizens to share the success of the stoneware, they were allowed to pick up a jug from the potters for an annual festival. This was filled with beer at the monastery free of charge, but only as far as the person receiving it could still lift the jug with one hand. In addition, there was a Rhenish groschen and a pound of barley (Dornbusch, 1873).

Not all that glitters is gold, but titanium

German stoneware from the Rhineland town of Siegburg was thus very valuable at the time of the Middle Ages due to its quality and craftsmanship and was traded like precious metal throughout Europe. The durability of the material also played a major role. The hardness property of Siegburg stoneware is due to the presence of titanium dioxide (TiO2), mineral grains of high density. Rother (1992) examined several samples of Siegburg stoneware from the 15th century using X-ray fluorescence techniques. The results of the investigations show the typical compositions of Siegburg stoneware. According to this, Siegburg stoneware typically consists of 1.7 – 1.8 percent by weight of titanium dioxide (Rother, 1992). Titanium dioxide occurs in four natural polymorphic forms – minerals of the same composition but with different crystal structures. The most common forms of titanium dioxide are rutile and anatase. It is much less common as brookite and akaogiite, so it can be assumed that rutile and/or anatase will most likely be found in our sherd. Those X-ray absorbing particles that are shown in the animation as a sparkling dust cloud that shines so beautifully golden.

Furthermore, the air inclusions allow conclusions to be drawn about the manufacturing process. The horizontal orientation of the bubbles suggest that the vessel was produced in a rotating manner and the surface was horizontally scrapped with a wooden tool and smoothed in the process (Berg, 2008). 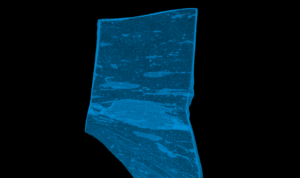 The beautiful colour and also the sparkle are thereby solely the result of an illustration, the rendering (see also the previous article). With the CT measurement, of course, no actual colour can be recorded. Only the absorption behaviour, i.e. the increased absorption of the particles, is known.

On the one hand, we generate new scientific information about the composition and distribution of specific material properties. Non-destructive access to the interior of an object is also provided. On the other hand, the actual colour information of the object is lost.

Figure 3: The clay shard as a 3D grey scale image, the sharp fracture edges suggest a hard material, rendering of the clay shard to imitate silver and gold. 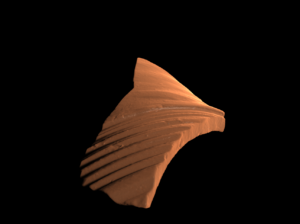 Object properties can thus be made almost variably visible and invisible. The object is literally given a digital image makeover. Aesthetically pleasing digital objects are born. But how can the two sources of information be harmonised and what effect do they have on us?

The project “DigitalMaterialities – Virtual and Analogue Forms of Exhibition” is all about this interplay between the original object and the artificially created version. Researchers from an interdisciplinary team are attempting to blur the boundaries between the real and digital materiality of museum pieces in order to derive the greatest benefit from both combined approaches. Researchers from the Leibniz Institute for Knowledge Media (IWM) in Tübingen, the Leibniz Institute for Maritime History (German Maritime Museum, DSM) in Bremerhaven and the MAPEX Center for Materials and Processes at the University of Bremen are involved. A transdisciplinary  team from the fields of psychology, cultural studies and material sciences.

In addition to the study of material properties with natural science questions and the historical background, the influence of digital materialities on the knowledge acquisition process will be investigated in particular.

A change of perspective – in transition

Museums are in a state of transformation. Driven not only by the pandemic, humanity is increasingly striving toward digitisation. For example, some museums are already being brought virtually into the living room, allowing visitors to digitally touch objects, experiment with them, and understand their uses or modes of operation. Fragile objects that would otherwise be locked behind glass and not allowed to be touched under any circumstances. A benefit that is not limited to applications at home. In fact, digital objects invite on-site museum visitors to explore museum objects interactively and with increased attention. The changed colour design of the digital object influences the perception. Huge projections can draw the attention of museum visitors to their tiny original objects or focus on parts of the object that are barely visible to the eye. Certain material properties can also be supported by colour, as in the case of the rotating point cloud, for example.

Despite being bedded in the rough Weser ground for several centuries and exposed to unrelenting weather conditions, the clay sherd has relatively sharp fracture edges. This is due to the hardness of the material. Let’s assume we didn’t know what material the shard was made of and looked at the contour of the shard alone, without colouring – we would probably assume it was a hard, brittle object. Maybe even metallic?Of course, rendering also makes it possible to influence presumed properties and make an object look different. For example, digital light and shadow settings combined with well-chosen surface properties can make the clay shard look softer. The result looks almost like an organic structure. On the other hand, the surface can also appear rather coarse and rugged due to the selected rendering.

The interplay between the original object and its digital copy thus leaves room for interpretation and opens up new ways of understanding more complex functionalities of the historical exhibits. But beware! Here lurks the danger for misinterpretation. The colour design could possibly detach the digital objects from their original object and make them no longer associated with it. This could be the case especially with very abstract representations. There is a fine line between attracting attention and daring to lose the connection to the original object. There is also the question of what value we assign to the digital copy. Is the digital product a digital twin, merely a digital copy of an original, a supplement, or a completely new object?

This is an interdisciplinary field of research that transcends the boundaries of the STEM field and raises the philosophically challenging questions: What is real, what is digital? What is just another form of representation? What is a copy? And what would an object be called that is transformed from digital back into something physically tangible through 3D printing?

Stay tuned: Always on the last Friday of each month, a puzzle will be published on the Instagram account of the Maritime Museum (@Leibnizdsm) with a digital presentation of a new object that invites you to marvel and wonder.