Do you know „Once upon a time… a scientific fairy tale“? 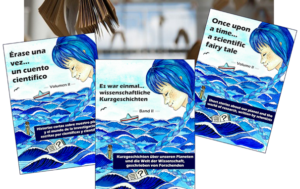 If not: You really missed something! Exciting stories, touching poems, fantastic characters… Yes, the characters are mostly fictional, but the backgrounds are real science. So, real “science in fiction” for children and all who appreciate lovingly crafted stories with a true core. These worlds to dive into and to linger were created by an international team of scientists.

If you already know all this: You will be happy to learn that the second book is there!!!

Once upon a time… some enthusiastic scientists were studying the ocean and the climate (e.g. at the MARUM at the University of Bremen or the AWI). They were so amazed by what they found out that they wanted to share it with the whole world. They began to write stories to make it possible to experience what their measuring instruments, computers and literature searches were spitting out as a scramble of numbers and concepts. They found many enthusiastic fellows. They became a large international team that combined many experiences and skills. The stories were accompanied by pictures, and the stories became an entire book, in different languages: German, English, Spanish, Mandarin, Filipino and Portuguese, French is the “oven” and more are to come. 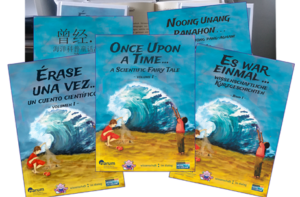 That was the beginning of the story of the creation of “Once upon a time… scientific fairy tales”. Enthusiastic feedback came from many sides and now after a short reflection, the search for funding, many new ideas and great effort a second, as beautiful if not more, as impressive if not more book has materialized! This second book is already available in three languages: German, English and Spanish.

Here is our warm invitation: Have a look at their website. There you can download the books or, if you wish, you can soon order a print version.

Or check them out on social media and listen to the short preview podcasts: