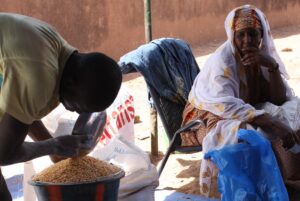 Long wait for food, shortage of fresh food and water scarcity. These are some of the common problems faced by the displaced people living in refugee camps. Same is the case in relief camps set in places hit by natural calamities like flood, earthquake, drought etc. The previous article was about “Controlled Environment Agriculture”. In this article, you will read about an interesting project called “MEPA” which intends to solve food challenges on earth, especially in refugee camps using CEA technologies.

MEPA stands for Mobile Entfaltbare Pflanzen-Anbausystem or mobile deployable plant cultivation unit in English and is a project of DLR (German Aerospace Center). The researchers involved in this project work on the development of habitats and greenhouses for crewed space missions. MEPA is aimed to be used during emergency situations for humanitarian aid. Refugee camps are its main focus.

How are food challenges in human space exploration similar to a situation in refugee and relief camps?

In social context, astronauts and refugees are at two extremes. Although both groups are displaced very far away from their homes, their situations are different. One goes for a planned mission with needed resources and all safety measures in place. The other are ordinary people who flee their country due to war, violence or persecution, with little or no resources and seek safety in another country. 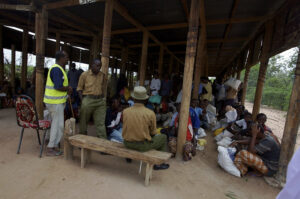 Figure 2: Refugees wait for the distribution of food aid to begin nearby, at the Ifo refugee camp in Dadaab, Kenya, photo: Kate Holt/Africa Practice.

But if we closely analyse the food scenario of both the groups, we will find some similarities. Astronauts depend on the packed food from Earth and for long duration of stay, resupply missions are necessary. This reminds of people in crisis areas waiting for their food which are supplied to the camps by government and humanitarian agencies. The cost of resupply missions is very high and a similar situation can be thought about supplying food to camps. A lot of time, effort and money are spent on storage, infrastructure and transportation of food. As discussed earlier, food challenges in lunar and Martian missions can be solved by growing fresh food in greenhouses. Similarly, a local supply of fresh food can solve the food shortage in the camps. 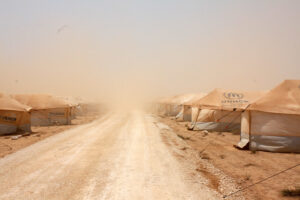 Oh, and as a side note, food plants not only satisfy our appetite, they also impart psychological benefits. Looking at plants could be soothing for both astronauts (tired of the sight of vast empty space) and refugees (in camps at remote dry locations). 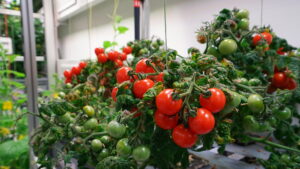 After going through the above similarities in food scenario, the next logical question is why not apply CEA technologies to solve these terrestrial food problems? This is exactly the objective of project MEPA. Let’s get into more detail. 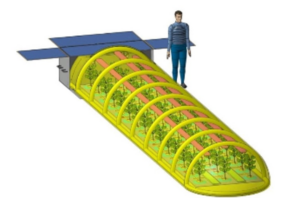 The design of MEPA is based on CEA technologies. Since it is intended for terrestrial use rather than in space, some modifications are made accordingly. MEPA consists of three major parts.

The Automated Support Unit (ASU) accommodates systems like AMS and NDS (discussed in the previous article), power system (which includes solar cells, battery and cables) and sensors for control. The Inflatable Grow Tube (IGT) is a tubular structure inside which the plants grow and it is inflated out from the ASU during deployment. The upper part is a transparent shell supported by air beams. The atmospheric conditions inside the IGT are controlled by AMS. In addition to natural lighting, ICS is integrated into the outer shell (LED lamps). Provisions are made to enter the IGT during harvest.

The Seed Cultivation Mat (SCM) is a base on which the plants grow. The mat is rolled up inside the ASU during transportation and later unfolded. It contains series of packets inside which seeds and fertilizers are implanted. Drip irrigation and air pipes run along the SCM supplying water and air. Water is one thing that has to be externally provided to MEPA. SCM also provides CO2 for plants. The SCM has to be replaced after every harvest and it is disposable. 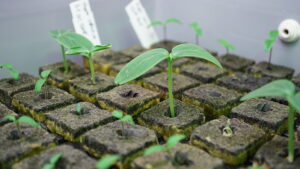 MEPA is customizable as it can be made as a minimal system, closed-loop system or as a hybrid system (shown in figure 5). MEPA is powered by solar panels and during unfavourable weather conditions, the stored energy can be used. The overall structure is lightweight and robust, and the design is compact for easy transportation and deployment. Multiple units of MEPA can be accommodated inside a container for transportation. MEPA is reusable and energy efficient. Its working is simple and therefore doesn’t require high-skilled workers. Food production in MEPA is fast as it will only take 4 to 6 weeks for first harvest.

Even though the initial locations for deploying MEPA are crisis regions and refugee camps, MEPA has a greater potential. CEA technologies in general could be used for solving global challenges of food shortage and climate change. In the course of growing population, poverty, war, natural calamities, climate change and other issues on Earth, CEA technologies from space research is a potential game changer. The agriculture sector is already benefiting from space research such as Earth observation satellites which can analyse and improve farm land usage. Through adopting systems like MEPA, we would be one step closer to our vision of becoming sustainable communities with clean environment, zero hunger and responsible consumption and production.

This article is based on topics taught in the “Human Space Exploration and Habitation” lectures for MSc. Space Engineering programme at the University of Bremen. Researchers behind MEPA project belong to the EDEN group at DLR Institute of Space Systems, Bremen. They focus on greenhouse modules and advancement of cultivation technologies to use them in future space habitats. The group operates an experimental greenhouse module in Antarctica as part of the EDEN ISS project. To know more about the research group and their interesting projects, check out the links given below.