Doing science in a tropical paradise 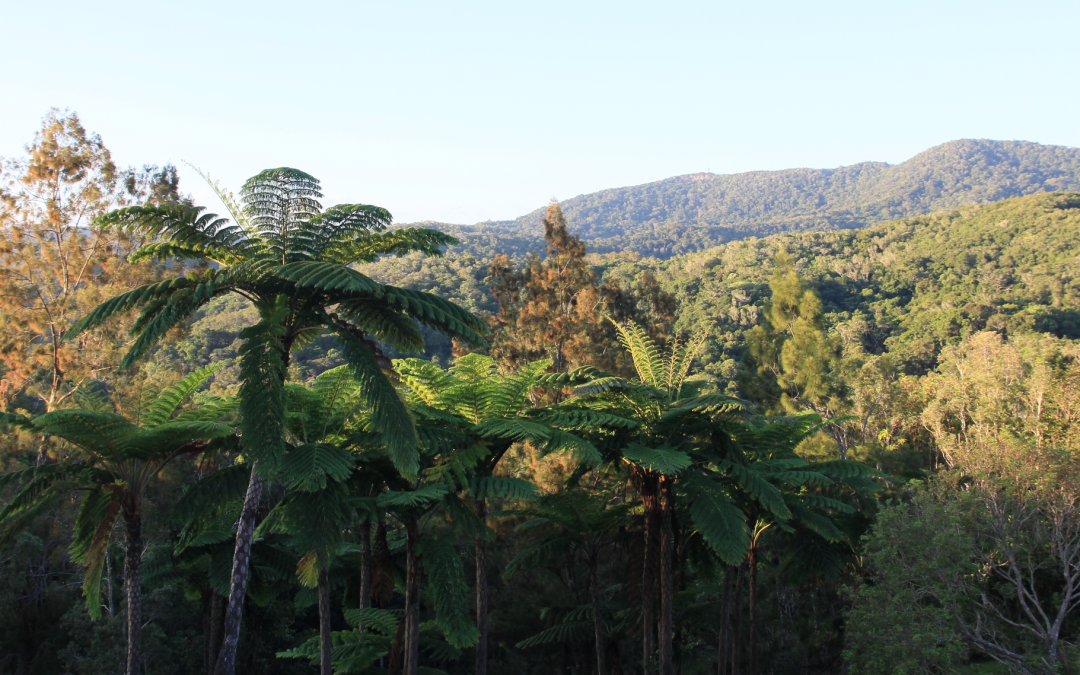 With the Erasmus+ Mobility program I was able to successfully complete an internship at the Research Organisation “Conservation Research New Caledonia” (CORE.NC) in the pacific island of New Caledonia. For 3.5 month I collected data for my master thesis, learned about the studies CORE.NC conducted regarding New Caledonian wildlife, and was able to get to know the country and its people a little bit. The main topic I worked on was the predation of the nests of the Fan-tailed Gerygone (Gerygone f. flavolateralis). This internship was very interesting, insightful, demanding, enriching, and, last but not least, simply fun for me, and I’m very thankful for Erasmus’ financial support. 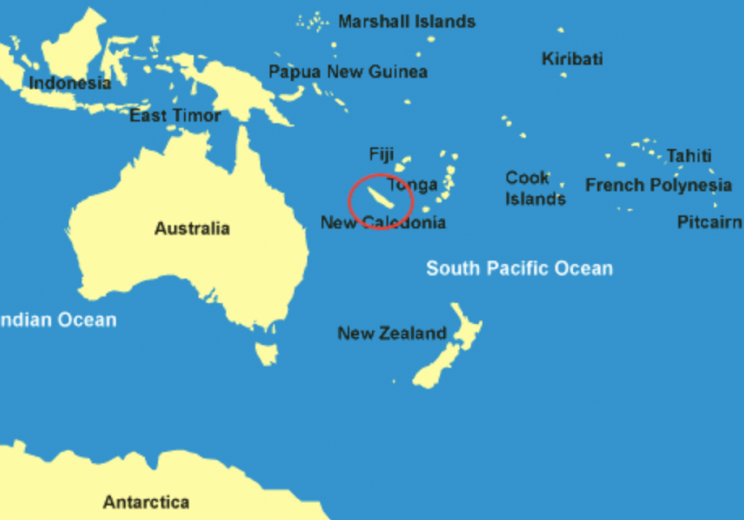 The journey began end of September 2017 when I boarded on a long flight to get to the other end of the world. New Caledonia (NC) is an oversea territory of France (therefore they speak French and belong to the EU etc – which is why I was still funded(!), but they don’t have the Euro). It’s located ca. 1200 km east of Australia and 1500 km north-west of New Zealand in the Pacific. It’s very isolated.

The main island, Grande Terre (where I was), is approximately 400 km long by 50 km wide, and is oriented in a northwest – southeast direction. A chain of mountains with moderate altitude runs along its axis. The time from mid September to mid October is often described as the ideal time to travel to New Caledonia, because then precipitation is lowest and fine weather is most common. During my first month there it didn’t rain once. Later then the rain season slowly starts. In mid December the field work usually stops because it rains too often. But also because cyclones can occur. Mean annual temperatures range between 22 and 24 °C, which for me meant a day temperature of mostly (26-) 30 °C and at night it was around 20 – 25 °C. All in all it is located at the border of the tropics.

As one can imagine, the flight there is very long. I flew with Korean Air from Frankfurt to Seoul (10h 15), 6h 30 later from Seoul to Nandi (Fiji) (10h 10) and then waited for my flight to Nouméa (capital of NC) for 8h30. Only, the staff then told me there was a strike in Nouméa, so my flight would by delayed until further notice. That’s how I spent two nights in a 4 stars hotel on Aircalin’s expenses…

In NC I was based at La Foa, a village at the west coast and approx. 2 hours north of Nouméa. I stayed at the house of my thesis supervisor, a German working in NC all year for the Polish Academy of Science. With me were my team members – an Italian (our “boss”), a Polish PhD student and a French field assistant. The PhD student and the field assistant arrived 10 days later than me. We were all working on the same bird, a small passerine endemic in its subspecies to NC called Fan-tailed Gerygone (Gerygone flavolateralis flavolateralis), although with different foci. Therefore we searched all together for the nests.

When I finally arrived to NC, we immediately went into the field on the first day. And from then on, we basically only left to sleep for a little bit and then come back the next day… We had two main field sites (the natural reserve “Parc des Grandes Fougères” (PGF) and a private property near Farino) as well as other sites 1 hour away which we visited less frequently. I would have liked to visit the other sites more often – one was just next to the beach. One nest was found literally 10 m from the ocean. Ironically it was also the site with the highest density of nests we found albeit being very small. When we visited this site, we would sometimes go snorkeling after work, open a coconut collected somewhere with the machete and drink and eat it, and watch the beautiful sunset. 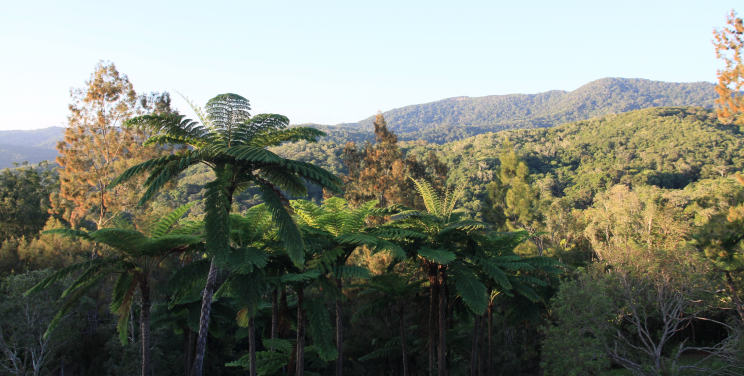 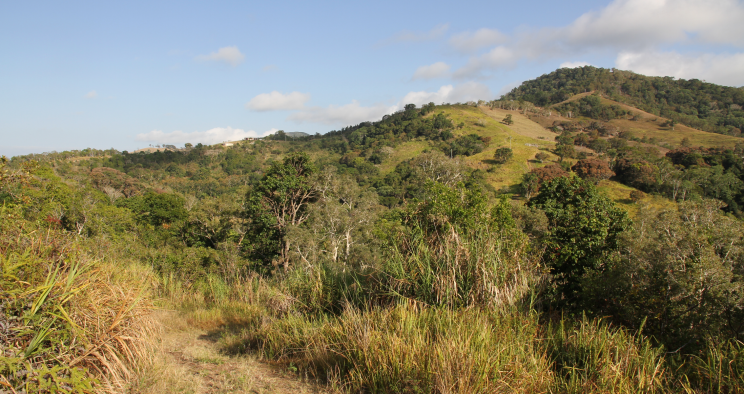 However, these other field sites near Bourail were not really useful for our research. The year 2017 has reportedly been the driest year in 43 years. The Gerygones therefore began to nest much later (ca. a month) than usual – in all field sites, but especially in Bourail, where the climate is even drier than La Foa. Therefore we started to find nests only at the end of the field season (beginning of December.) The only exception was the beach site, probably there it was humid enough. For a long time it was even not clear whether I could collect enough data for my thesis.

To illustrate what a typical day would look like: The four of us wake up at ca. 5.30 am, have a good breakfast and then drive to the field sites. There we usually split up and basically search for nests the whole day while each of us also continues working on their own projects. The field assistant was catching and ringing Gerygones (and whatever else flew into the net), the PhD mapped the territory of certain Gerygone pairs, the team chef checked the nest content of each nest found so far (if it’s still in building or already has eggs or nestlings), and I was recording the activity of predators (birds, invasive rodents) around each nest and doing experiments about rat predation of the nests. 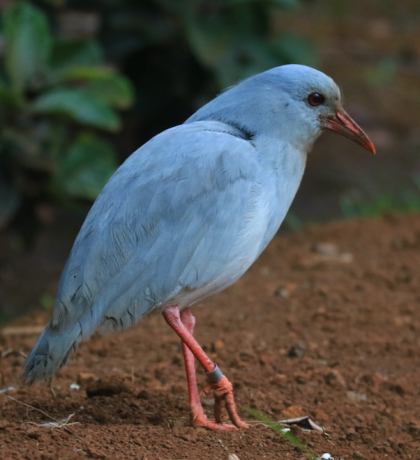 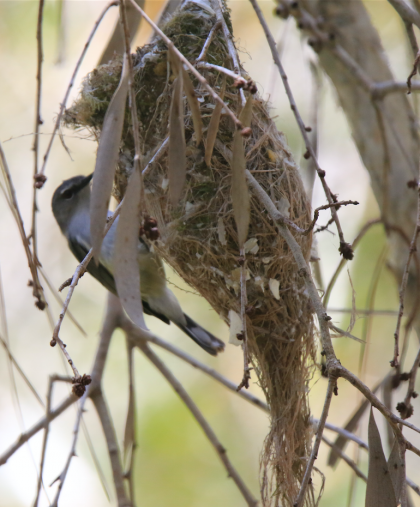 Parent bringing food to the nestlings 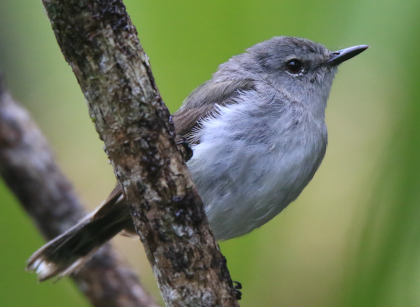 To identify the nest predators we also put cameras in front of the nest. Around midday we meet to have lunch and update each other. The lunch break lasted between 30 minutes and 3 hours because it usually was too hot to work. Most field sites were in the blazing sun with little or no shadow, and additionally on slopes, so the field work could be very exhausting. Then we split up again, do whatever we have to do and meet at around 6 or 7 pm when it starts to get dark. Afterwards we go to the supermarket (called Leader Price, but it’s not cheap at all as basically everything has to be imported), buy „fresh“ baguette (it’s already bending and not crispy at all when you leave the supermarket), go home and cook, and then do data entry.

Because it was so dry, everything started later than anticipated. During the first month we found only a few nests which also meant that we couldn’t start the experiments. Therefore the work load got shifted by one month. It was planned to do rat experiments in the beginning of December. Instead, I did them alone (the other team members left NC in the middle of December) from end of December to beginning of January.

During my stay I also learned about the work my thesis supervisor does in New Caledonia. He works with the endemic and emblematic Kagu (Rhynochetos jubatus), a bird with complex social structures (e.g., the children visit their parents and grandparents regularly). My supervisor and his colleague go out once a week after sunset and try to monitor the whereabouts of every radio-tagged animal. At night these flightless birds sleep on the ground, so it’s easier to catch them than at daytime. In the process they also catch other, untagged Kagus which may sleep next to the tagged Kagu. With the radio-transmitters and information about relationship it is possible to understand the social network that structures the Kagu community. Once I was able to join them for a night. We tracked six individuals and even caught a Kagu. It was radio-tagged, ringed and weighed. This experience was very interesting – there is no other possibility to get so close to these endangered birds, and it’s also fascinating to walk through a tropical rainforest at night. 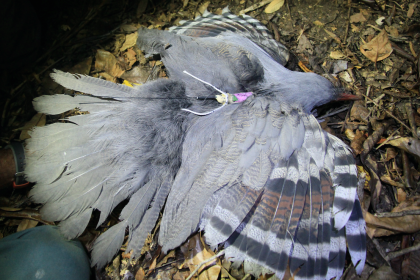 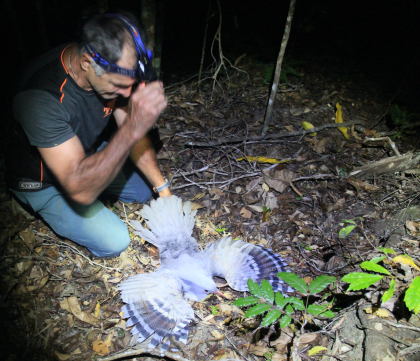 Even though the field season went not quite as planned, I was – also thanks to very good supervision – able to successfully complete the internship and to get some interesting findings that will be used for my thesis and a scientific publication. Thanks to the team, the general hospitality of the people there (Caldoches, the French, as well as Kanak, the indigenous people), the fact that I could speak French again, the field work, and also thanks to the great weather which enabled me to escape from „wintery“ Germany I enjoyed my stay in NC very much. Unfortunately I wasn’t able to travel as much as I would have liked, we were working too much, but I still got to know at least some parts of the landscape and the local avifauna very well. Here I should mention that it’s not the tropical paradise like on postcards that some people might expect – there are only few nice beaches and the landscape can be quite monotone on the west coast. Still, there are some impressive landscapes (see last photo), and for culturally interested people the Kanak culture (traditions vs. modern world) will be fascinating.

I definitely learned to work in an international environment and in climatically demanding conditions, got more experience in working both in a team and alone in an unfamiliar environment, and acquired extensive knowledge about the species, NC fauna in general, as well as a thorough understanding of scientific research (field work especially). I learned how to search for nests, do rat trapping, conduct experiments, set up field cameras, do mist-netting for bird ringing, open a coconut with a machete, and the right method for cutting a pineapple. As this internship was combined with my master thesis and was furthermore related to a very specialized topic, I cannot recommend it to everyone – in this form it’s not possible to repeat it. However, I can only say I enjoyed it very much and it definitely enriched me both as a scientist and a person. 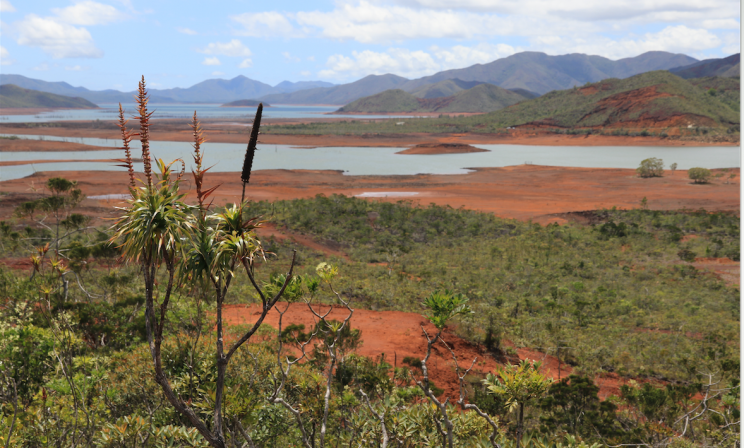 Parc de la Rivière Bleue, the other big natural reserve in Grande Terre – an extremely high amount of iron in the soil causes the red color. The soil also contains 25 % of the world’s nickel resources, which is why NC is the 5th biggest exporter of this valuable metal (after the large countries Philippines, Russia, Canada and Australia).