My impressions of Malta are very mixed. It is a very diverse country that exhibits many contrasts which have to be dealt with by its inhabitants on a daily basis. People from various different cultures live together and in public people from all social statuses are confronted with each other everyday. European standards blend with standards of African and Asian countries. Naturally, my point of view is a very subjective one. Not only am I infuenced by my German background, but also did I only spend three months on the island of Malta, which is a rather short period of time to thoroughly get to a foreign country. However, I am going to try to convey my impressions as comprehensively as possible.

As aforementioned, one is able to find European standards here. When being in places that are supposed to represent Malta, like the capital Valletta, the country tries to put emphasis on them. On the one hand, clean streets, pricy boutiques and art exhibitions can be encountered. On the other hand, when going to smaller cities that are not as touristic, poverty, horrible wages and living conditions become much more apparent. The gap between the rich and the poor is seen rather obvious.

It appears that the Maltese government is currently aspiring to converge to the developmental advances of central Europe. These aspirations range from environmental and nutritional matters to cultural and organizational issues: Recycling is encouraged, vegetarians and vegans are provided with more and more opportunities and cultural celebrations are increasing.

Despite Malta’s efforts, the outcomes are not fully satisfying yet and some problems seem to be particularly hard to tackle: The traffic system is the opposite of safe and reliable, despite the try, there is rubbish almost everywhere and food is kept in plastic packaging. The quality of the water is horrible: skin and hair is dried out all the time. Pollution of the air and sea is not better as well. Some invesigative journalists say the development is repressed because of the corruption in Malta.

Taking all the experiences I made into account, this seems a valid assumption and very likely. I worked next to a memorial for Daphne Caruana Galizia, one of the investigative journalists that was killed about half a year ago by a car bomb as she was revealing corrupt structures. All in all, I am of the opinion that Malta is a country representing the advantages and disadvantages of globalization. Yet, first of all, how did I end up in a country like that?

To fulfill my “Auslandsmodul“ I wanted to work abroad instead of studying abroad because I thought it would offer me more opportunities to speak English frequently. Another motivator for an internship abroad was my need for a break from studying in order to be able to appreciate it again afterwards. I really wanted to go to Malta because I wanted to see the world and get to know a different culture as well as not be too far away from my family.

Additionally, it is a country of the European Union and thus a trip there is easier to organise and living costs are not as high as in Great Britain. So I got in touch with the organisation “PractiGo“ of which I had heard through several events at university. Initially everything happened really quickly. In the time span of two weeks my language skills were evaluated, all insurances were taken care of and I had spoken to the coordinator in Malta who was trying to find the perfect job for me. Everything seemed to be working out really fast. However, two weeks before I was supposed to catch my fight to Malta, there was still no confirmation concerning my work placement. Only ten days before going to Malta, I knew for sure that I would be able to work there.

On my first day, the coordinator who I was talking to about my job took me to the place that was going to be my office for the next three months and showed me around Valletta. I was an intern at Valletta 18, a foundation on the occasion of Valletta being the European capital of culture in 2018. I was part of a team of women who created an exhibition called “Dal-Bahar Madwarha“ or “The Island inbetween”. It is an exhibition that deals with Malta’s function to connect Europe and Africa as “The Island inbetween”. There are installations at three different venues concerned with Maltas history as well as its current politcal and social situation. (https://valletta2018.org/cultural-programme/dal-bahar-madwarha/)

On my first day I was already praised for my English skills which led to my boss giving me rather diffiult tasks and quite a lot of responsibility. That was a great compliment for me, so I was eager not to disappoint the team. They were quite satisfied with me, so I soon became the “expert“ on one of the venues.

The venue was called the Underground Cistern, a beautiful, cathedral-like looking water storage beneath the St. Johns church right in the middle of Valletta. The artwork by Susan Philipsz was a sound installation that was singing “Who by fire“ by Leonard Cohen interrupted by the sound of a war-damaged bell.

I started work at half past ten every morning, so after the 60 minute bus ride that brought me from where I lived to Valletta, it was my task to switch on the power, open up the door to the underground and clean the place a little bit so that it was presentable for visitors. When the first visitors arrived, I took them down to the cistern, told them everything I knew about it and tried to answer all of their questions. One of these sessions usually lasted fifteen minutes.

I took turns guiding the groups around the cistern with a colleague, so that nobody would be away from the sunlight for too long. When being upstairs in front of the entrance, I was in charge of informing the visitors about how to get to the other venues and I got the chance to have conversations about the cisterns with them while they were waiting. It was a wonderful job as the people were really friendly most of the time and were really amazed by the artwork and thankful for the information they were given.

After taking the last group of people down at 6:30 PM, I had to lock the door up again and switch off the power. Every once in a while, when new interns arrived, I showed them how to switch everything on and off, and taught them how to guide people around, so that they could help in the future.

Some days I was also needed at the other venues, yet, I did not love them as much as the Underground. To get to know more about all of the artworks, I attached the information given to me and the books that were given to the visitors. However, when being there and being able to talk to the people, one got to know much more about the artworks than from reading the texts.

After a long day at the exhibition there was not that much for me to do anymore, since I was usually very tired from working. I tried to explore the island on my days off, which were not necessarily on the weekends, since the exhibition was closed only on Mondays. Working on Saturdays and Sundays was often the case, since the peak time for visitors was the weekend.

When I was off, however, together with my Spanish flatmate and mostly Portuguese and Colombian people, we went to see the beautiful beaches or the old architecture, over- as well as undergound, of which Malta has a lot to offer. Besides playing cards and outdoor games, we often ended up talking about our lives and interests. We all enjoyed telling the others about our home countries, its respective specialities as well as its problems. To some extent we wanted each other to be able to comprehend our personalities a little better through giving them some sort of background information. The fact that we all missed home was a contributing factor, too. Anyways, when talking to those people, besides learning about different cultures, I also had to deal with different accents. Spanish, Portuguese, but also Japanese, Colombian, Russian, Italian or French.

Additionally I got to know different dialects. Be it American English spoken by visitors, British English, spoken by my boss or, of course, Maltese English, spoken by many colleagues. Plus, there are so many different varieties of Maltese English. One would have never expected to find such variety on an island of this small size. I believe it made me understand the linguistics of the English language much better and it was great to experience the differences as discussed in linguistic seminars in real life.

The literary part of english I encountered just as directly e.g. in the form of Susan Philipsz’ lyrics in the Underground or in form of the several poems that could be found in the group exhibition. I always had to and wanted to analyse and interpret them. First I did so on my own and then I could discuss them with my colleagues and visitors.

Still, I am convinced that I learned the most about cultures. Malta being a country in between Europe and people not needing a visa for three months, led to it being overcrowded with different nationalities. Consequently, Malta has to deal with many refugees and economic problems, additionally to the the prevailing antagonism of poor Maltese people and rich tourists, of gentrification and rising living costs whilst having miserable wages. I believe the three months I spent there have taught me more about accepting and being sensitive to other cultures than I could have ever learned at home. Still, the most important thing I learned is that there is so much more to know about different cultures and that it is close to impossible to ever know everything about them.

A rather urban landscape in Valletta, where I was working, 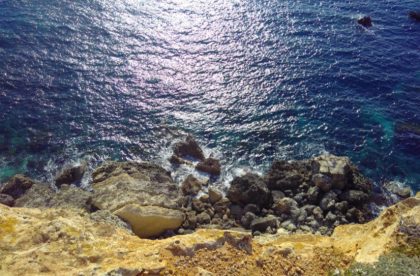 was completed with beautiful natural sceneries elsewhere on the island.