Foraminifera – A Hard Shell With a Soft Core

Fig.1: Left: Close-up of a foraminifera with pseudopodia; right: Four foraminifera in direct size comparison with a pinhead. Copyright © FORAREX 2018

Foraminifera (Latin for “hole bearers”, informally called “forams”) are single-celled organisms that usually have a multi-chambered shell, which can be built in various ways depending on the species. They are the stars of the FORAREX (FORAminifera Rocket EXperiment) project, in which we investigate their behaviour and shell growth under microgravitational conditions.

And what kind of critters are they exactly? Honestly, you are not the first to ask us this question. Of course, you don’t come across these animalcules very often.

The giants among protozoa
Foraminifera are small and mainly live in the sea. They occupy diverse marine environments: from the shallow intertidal zone, coral reefs to the deep sea. They are divided into planktonic (“floating” in the water) and benthic (living on the seabed) species. They form either a simple or a multi-chambered, often intricately constructed shell. It consists of an organic structure into which lime or foreign material (e.g.,  sand, sponge needles) is incorporated for stability. Their shell shapes resemble filigree snail shells, small stars or freshly popped popcorn. Their size varies from that of a small grain of sand to that of a kiwi.
Fossil representatives such as nummulites – colloquially also called coin stones – even show shell sizes of up to 16 cm.[1] That is about the width of a standard postcard. Remarkable, especially when you consider that this is still an organism consisting of only one cell. ONE cell! Let that sink in.

Broadly speaking, life on Earth today is divided into three major domains of organisms – the bacteria, the Archaea and the Eukaryotes. Bacteria and archaea each live as single cells with a rather simple structure. Neither has a nucleus. While we encounter bacteria all the time in everyday life, archaea often prefer more extreme habitats, such as hot springs with boiling sulphuric acid (see Fig. 2) or deep layers of mud without oxygen. There is some evidence that archaea are still the most similar to the first life forms on Earth. Some archaea only blossom under conditions that otherwise prevail in a pressure cooker, for example (110 °C (230°F) to 135 °C (275°F)). 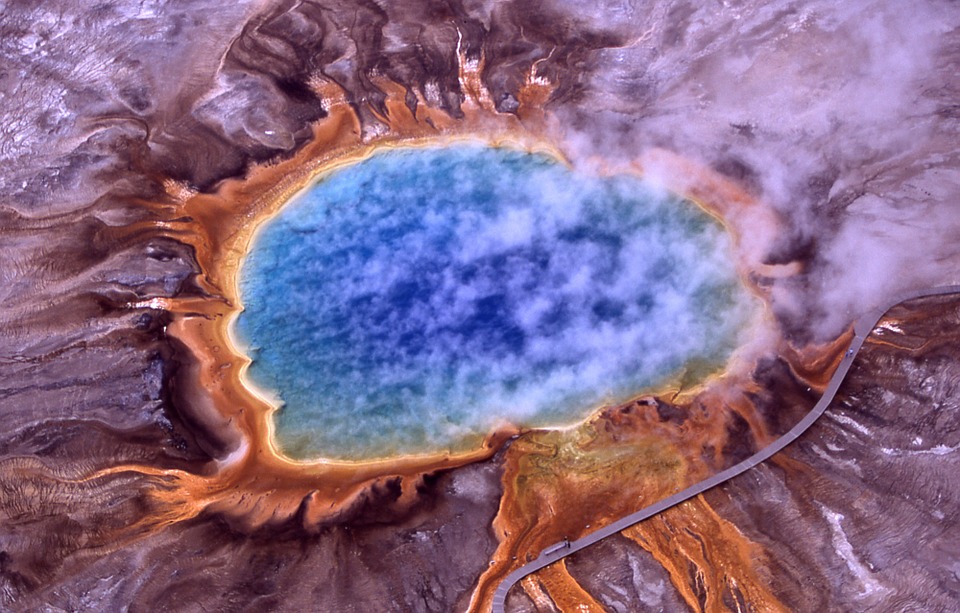 Fig. 2: Some archaea species can only thrive in very uncomfortable biotopes, such as hot acidic springs. A famous example is the Grand Prismatic Spring in Yellowstone National Park (USA). Copyright © WikiImages 2012 / Pixabay

The eukaryotes are built more complex, have more finely structured cells with a cell nucleus and other subdivisions. They do not tolerate extreme conditions such as heat or acid very well. On the other hand, eukaryotes can do other interesting things. They can build complex bodies from many cells and different tissues and thus distribute tasks better. That is much more exciting than swimming alone in rancid milk or boiling sulphuric acid. Almost everything we can actually see in the living world without a microscope belongs to the eukaryotes.

Kinship relations
So, where do the foraminifera belong in this context? Just like humans, they belong to the eukaryotes and thus to the more highly organised forms of life. But what can we vividly compare them with?

You might still know some single-celled organisms from school. In biology class there were amoebae, diatoms, paramecium (see Fig. 3) or euglena (yes, they were taught). The amoebae are quite large for a single-celled organism – about the size of the tip of a pencil lead (0.5 mm) – and can protrude parts of their cell to move around or to catch prey. Foraminifera have these characteristics as well. So the first explanation we heard in connection with foraminifera was that they were “amoebae with small shells”.

Later, however, it became apparent to us that this explanation could only be inadequate, because somehow there are still various differences between our foraminifera and the amoebae. Fortunately, biologists are very tidy people – anyone who has seen the office of a truly passionate natural scientist will understand what we mean. Besides bulging bookshelves filled with stuffed animals or alien plants, half-metre-high stacks of photocopies, journals, folders and boxes of specimens are also part of the décoration intérieure. They not only take up every available table space, but generally every piece of furniture, and yet the office owner can still unerringly pull an article out of the 45 stacks when asked. Accordingly, biologists have developed an ingenious system to catalogue and file all known species of living things on earth. This system is based on the known or currently suspected relationship of species. The result is a phylogenetic tree similar to your own family tree – only bigger.

We have listed a relatively simplified phylogenetic tree of the eukaryotes below (see Fig. 4). Humans as a species are not directly to be seen in it, not even the mammals or the vertebrates in general. Instead, only the larger, superordinate group of eumetazoans (“true multicellular organisms”) appears in it, to which humans, mammals and vertebrates belong, along with many others. Immediately the first branching after the eumetazoans gives the sponges (Porifera) as our next, more closely related group. Sponges can live up to ten thousand years and are important filter feeders in the sea – perhaps not the most unpleasant “cousins”.

Fig. 4: Rough overview of the phylogenetic tree of eukaryotes; modified after [2].

The next two branches group us and the sponges (see Fig. 5a and b) together with the – certainly never heard of – choanoflagellates and the amoebae. All of these are organisms that we could still most easily call “animals” because the structure of their cells still has similarities to those of animals. If our first comparison with the amoebae had been correct, then we would already be related to the foraminifera at this point – third cousins, so to speak.

But it is not quite that simple. If we look at the diagram, we find the foraminifera in a completely different place. The group of eumetazoans, sponges, choanoflagellates and amoebae is separated from another large group by a very clear branch. On this other side we find, for example, all the terrestrial plants as well as the green and red algae. Our houseplants, the plants in the forest and the green stuff that we often take out with us when we swim in the sea all belong to this group. Here we find everything to which the classical definition of “plant” still applies.

But the plants are again very clearly separated from several other groups that are… well, what actually? They are neither animals nor plants, otherwise they would have been placed in one of these two groups. Apparently, even among the eukaryotes there is more between heaven and earth than just animals and plants. The paramecium, for example, would be found among the ciliates. The diatoms (major group of microalgae) are the Bacillariophyceae. The euglena, on the other hand, belongs to the very remote group of “Excavata” (unicellular organisms with a pronounced oral cavity) and is obviously of a completely different nature than the other groups, which we can already address neither as animals nor as plants.

Finally, we find the foraminifera in a larger group called rhizaria (“pseudo-footed creatures”). This is interesting – besides animals and plants, there are definitely rhizaria on this Earth, because they are just as clearly distinct from the other eukaryotes as the animals and the plants.

So if someone should ask again in the near future what exactly foraminifera are, we can put on our glasses and answer quite competently: they are rhizaria. All right?