Graphene – as thin as nature allows.

What is it about the 2D wonder material that makes physicists and science fiction fans dream of the future?

We will find out what the hype is based on and how we can produce this material of superlatives at home.

Graphene, spoken graphéen, emphasised on the second syllable. A new wonder material, which created a sensation in 2010 when Andre Geim and Konstantin Novoselov received the Nobel Prize for its creation. Six years earlier, physicists in Manchester had succeeded in creating graphene as the first so-called 2D material. A breakthrough which literally has opened up a new dimension. All natural materials are three-dimensional, but now it is possible to create a single atomic layer.

Such two-dimensional lattices had already been discussed theoretically, but researchers had doubted that it was actually possible to produce such thin layers. Too unstable, they feared, would be the result. What a misjudgement! Although almost half a million times thinner than a sheet of paper

The graphene owes its high stability to its honeycomb-shaped lattice structure. 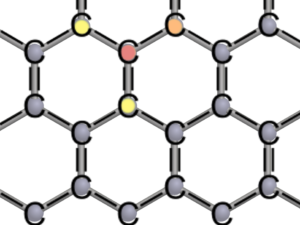 The hexagonal lattice structure provides a high stability to graphene. Each carbon atom shares one electron (single bond, one line) or two electrons (double bind, two lines) with its neighbors. So the electron shell fulfills the octet rule.

Each of the carbon atoms has three neighbours forming so-called covalent bonds with each other. This means that adjacent carbon atoms share electrons. Sharing something leads to a strong bond, this also applies for atoms. Carbon has four electrons in its outermost shell, so-called valence electrons. These four electrons can form bonds, trying to comply with the octet rule. According to the octet rule, configurations are particularly stable when the outermost shell is completely filled with eight electrons.

In order to distribute the four valence electrons fairly between the carbon atoms, each atom forms one double bond and two single bonds. As the name suggests, the atoms share two electrons in a double bond (red to orange) and one electron in a single bond (red to yellow). Each carbon atom is allowed to use four electrons of its neighbours [see figure of lattice structure]. In this way the octet rule is fulfilled for every atom in the honeycomb lattice. 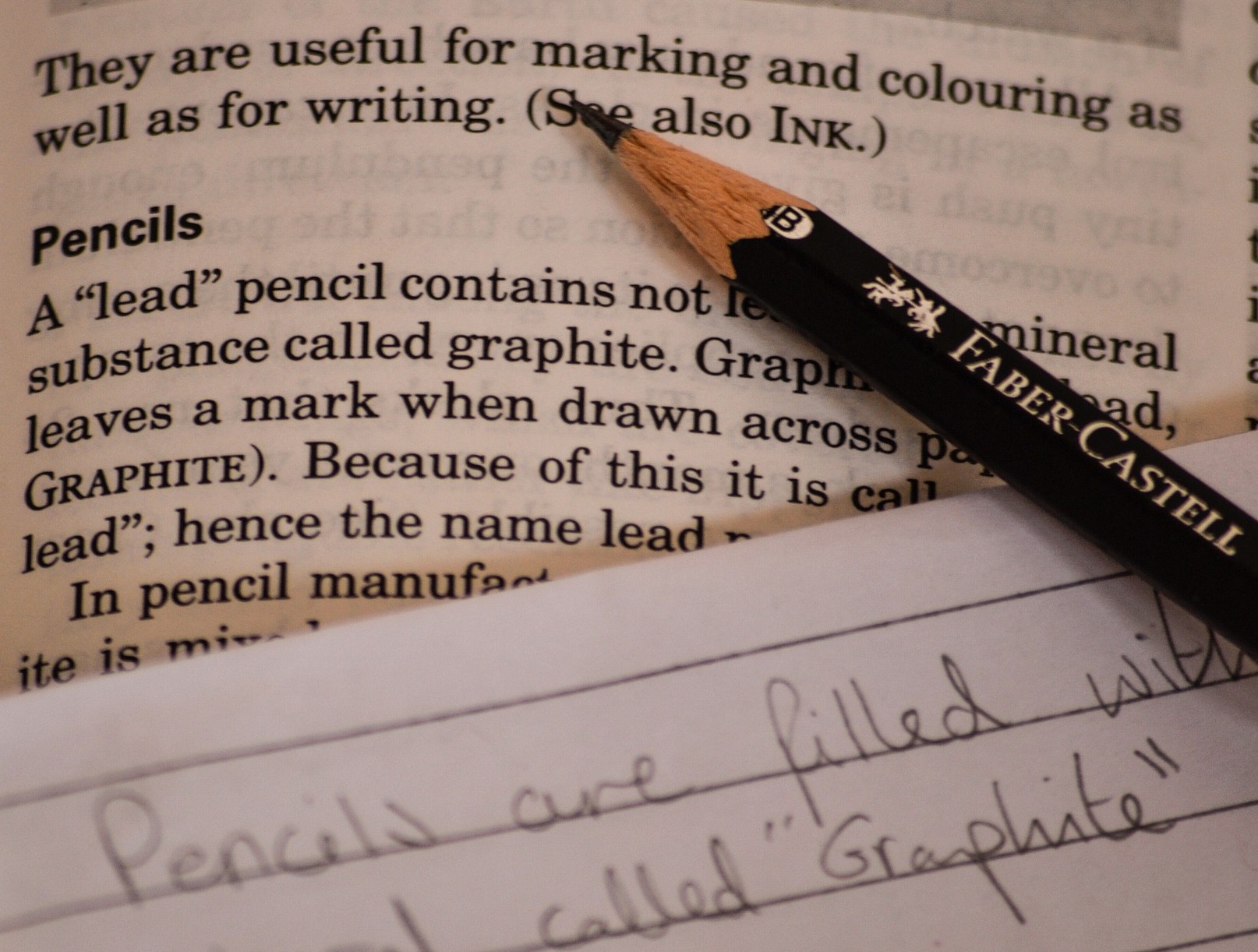 Did you know, graphene is an old acquaintance whose potential has only been rediscovered? Since elementary school we have been writing, drawing or calculating with lead pencils. However, these owe their name to a misconception: in the 18th century it was assumed that the graphite of the pencil was a lead ore. Today we know that graphite pencils apply a thin layer of carbon to the paper. Thin, but not thin enough. Only when a single atomic layer of the carbon lattice remains, graphite miraculously reveals completely new characteristics. This atomic layer, as thin as nature allows, is then called graphene. Graphene elegantly combines strength and flexibility. Despite its high stiffness, a graphene layer is extremely flexible. The incredible thinness plays an important role here.

In three-dimensional graphite, many of these layers are stacked on top of each other. Graphite is very brittle and flakes off quickly, since the individual lattice layers in graphite are only held together by the weakest form of the natural bond, the van der Waals bond. It is precisely this property that the Nobel Prize winners Geim and Novoselov utilised. They were able to produce a single layer of graphite and thus graphene in an amazingly simple process. 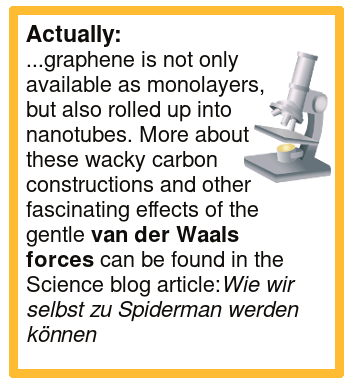 The procedure reminds us once again of elementary school, when many problems could be solved with adhesive tape. Since adhesive tape adheres more firmly to a lattice layer than the different layers in the graphite adhere among  each other, the adhesive tape takes a layer of graphene with it when being removed. By now, numerous other, often chemical, manufacturing methods have been discovered.

Researchers have even succeeded in producing graphene from food waste or plastic waste. This so-called flash graph can be produced quickly and inexpensively from any carbon. Today, graphene is still about 200 times more expensive than steel. One kilogram graphene costs around 168 euros, but waste would be a cheap raw material that we will never run out of. On the contrary! Maybe the production of graphene could even help to solve the worldwide waste problem. But let’s stick to the tape method for our experiment at home!

Diamant
As promised earlier I have prepared a DIY video for you:

Congratulations, you have produced graphene by mechanical exfoliation! 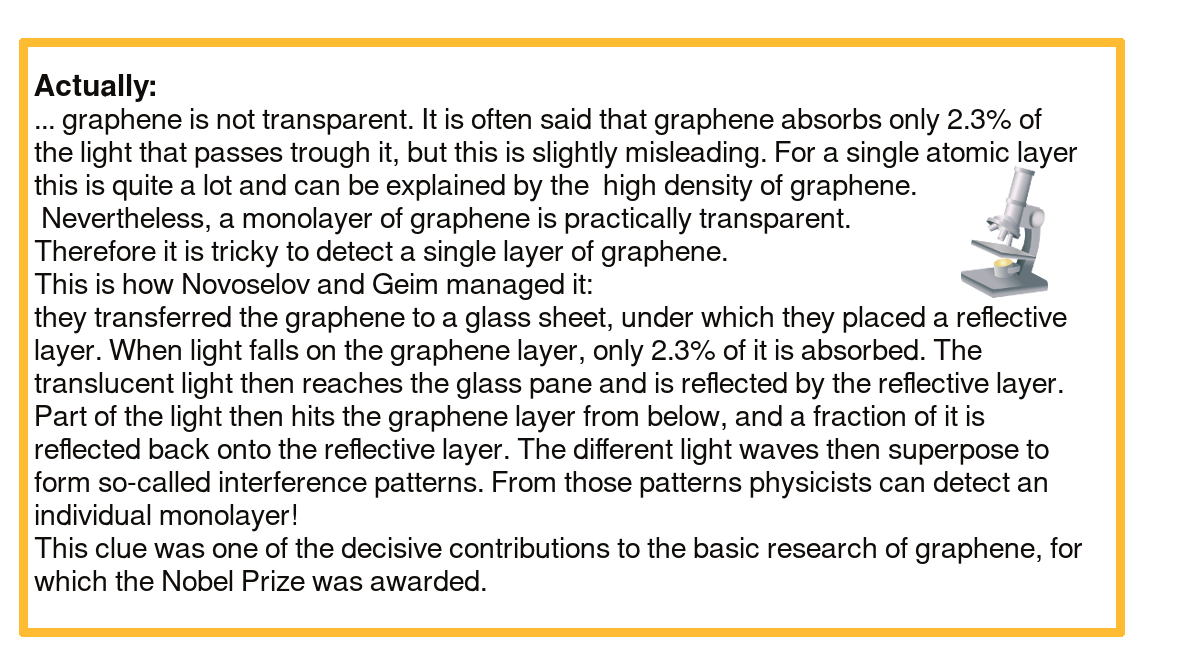 Geim sketches in his Nobel-Lecture the ‘Random Walk to Graphene’. At the end of this path, he and Novoselov succeeded in detecting a monolayer of graphene. Clicking on this image will forward you to the lecture video!

The tape method seems incredibly simple and maybe a little crazy. However, there is often not enough time in science to try out such unconventional ideas. So-called ‘off-the-job experiments’ allowed Geim and Novoselov (University of Manchester) to spend ten percent of their work time on the ideas that they had always wanted to try out. Often it leads  to nothing, sometimes to winning a Nobel Prize.

This playful origin did not stop graphene from heading for success: graphene outperforms classical materials in a multitude of disciplines.

Just like graphene, the famous diamond is also composed of carbon atoms only.

In the diamond structure, each carbon atom has four neighbours, keeping 120 degree angles to each other. This extremely compact structure reminds us of a tetrahedron, a pyramid of four equal triangles. For a long time the diamond was considered to be the hardest material in the world, but graphene can be as strong as this mineral [more].While a pure diamond is transparent being a three-dimensional crystal, a correspondingly thick graphene layer would be deep black  [more about the optical properties of graphene]. Also, in contrast to the diamond, graphene conducts electricity.

Graphene – a conductivity class of its own

What makes the conductivity of graphene special? There are metals, there are semiconductors, there are insulators and there is graphene. None of the three conventional classes really fits  graphene. In general, a material is a good electrical conductor if charge carriers, usually electrons, can move easily. Normally electrons in solids behave similar to free electrons: They effectively have a mass that affects their acceleration. In graphene, electrons effectively behave massless and can therefore move at incredible speed [more]. They dash through the graphene lattice with a 300th of the speed of light, this is equivalent to 3.6 million km/h. As with light, this speed is constant, and thus independent of the momentum of the electrons.

Copper is still the standard material for cables and electrical contacts. In an average wire, however, the speed of electromagnetic waves is only around 3.2 m/s. [for ~60Hz, more]. This is a lot slower than in a graphene lattice! Graphene conducts electricity better and also conducts heat very well [more]. The latter is relevant as charges generate heat, when they flow through conductors. The ability to dissipate this heat is becoming  increasingly important, as electronic systems  become smaller. For example, active cooling is currently used in most computers, but a material capable of dissipating the heat itself could be much more efficient. Also surprising about graphene is the fact that its excellent thermal conductivity increases with the length of a layer. Researchers have thus been forced to reconsider the present laws of thermal conduction.

For many years, silicon has performed strongly as a semiconductor. Semiconductors have characteristics of insulators and conductors, with a conductivity in between. Silicon has proven itself in industry, was utilised in chip manufacturing and can be found in virtually every smartphone and computer. Although graphene is discussed as a competitor in this field, it is proving to be a real team player. Should it be possible to connect the semiconducting features of the proven silicon with the high conductivity of the extremely light graphene, the respective advantages could be combined

[more]. For example, the two could be used cooperatively in the production of solar cells [more].

Hopes are high for the future of graphene. But when will this future actually begin?

In order to bring graphene from the labs to industry and into our shopping carts, the EU founded its largest research initiative to date, called ‘Flagship-Graphene’ [more]. he associated roadmap extends to the year 2030. A lot of market potential is seen in bio-medical technology, the energy sector, data technology, aviation or the military [more] .

But also the list of available graphene products for the private sector is getting longer [more]. For example, we could buy a pleasantly light motorcycle helmet with an outer shell made of graphene [more]. Graphene allows to distribute the force of an impact better and to protect the inside of the helmet by its excellent heat dissipation. If you are not interested in motor sports, new possibilities to integrate technologies into clothing could be exciting: Conductive, non-toxic graphene ink can be used to print flexible touch sensors and electrical circuits on textiles [more]. For medical applications, ultra-light graphene technologies are relevant, which we can wear comfortably on our bodies while they are monitoring our vital functions.

Thanks to its fine grid, graphene can also be used as a water or air filter. Since the COVID-19 pandemic, the topic of face masks has been omnipresent. Here, too, we could encounter a wide variety of models in which graphene is used [more]. 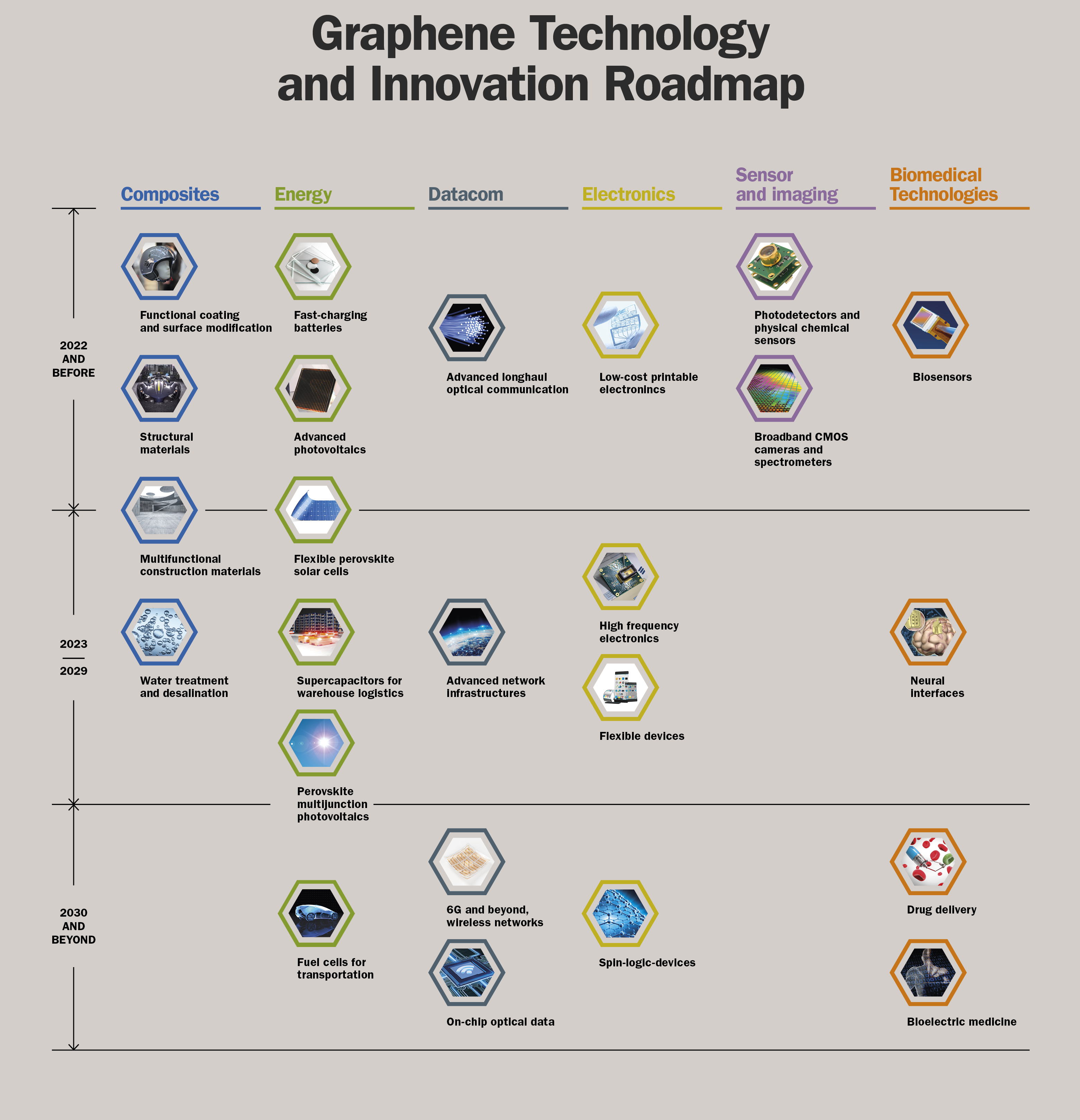 Roadmap of the Europe-wide funding ‘Flagship-Graphene’, which aims to take graphene from the laboratory to the industry. Thanks and credits to “Graphene Flagship”.

What else will be possible in two dimensions in the future? In my next article on this blog, find out what newer 2D-materials have to offer, even more than graphene!

Many thanks to Professor Tim Wehling, for great talks and feedback. He is an expert for 2D materials at the University of Bremen and graphene has been his research interest for many years. Have a look at the research of his working group: : http://www.itp.uni-bremen.de/ag-wehling/.

If you prefer listening, check out (german):

Thanks, for providing picture for free usage!

Translation with help of DeepL.com/Translator (free version), thanks for providing this service!