Alongside the tiny canal that passes the residences its inhabitants have built a row of beds, made out of wooden stillages. These constructions have the hight of a grown-up’s hip and were filled with soil and seeds. The hight made the planting and mainanance of the beds easy. And thanks to the decoration and painting of the stillages as well as the plants that have grown inside them, now these constructions do not only have a practical purpose, but also transformed the simple grass covered waterside into a decorative garden.

The project was initiated by the Indian student Jitin Gogne who had been missing some herbs and vegetables from his home country here in Bremen. As he works for the „kompass“-team of the International Office which organizes events for international students and promotes cultural exchange he found support for his idea very quickly. The „Grow Green international“ project was born. Since April Jitin and his colleague Johanna Vormann have turned more than 30 students into farmers. The students involved in the project are just as internationally diverse as the vegetables and herbals growing in the beds. There are Indian chillis, Mexican habaneros, red spinach, zucchinis, tomatoes, pak choi, lettuce and German regional specialities like sorrel and borage. And just like the plants the interest in the project kept growing. Many more students have expressed their wish to participate in the project next year. If the project will be continued next year is also a question of cooperation. This year kompass has received support and advice from the Studentenwerk Bremen and the FlorAtrium, that turned out to be very helpful.

Many of the vegetables and herbs were already harvested this week. And as farmers usually do, the inhabitants of the residences in Vorstraße and Spittaler Straße celebrated the harvest duly. Many of the participants of the „Grow Green international“ project came together on tuesday and had a big buffet, of course comprising various ingredients originating from the beds. The celebration was blessed with perfect weather an the ambience at the buffet and around the campfire was very c0nvivial. The evening had been organized by the project’s responsables Johanna and Jitin. They are both very content about the result of their work. „I am happy that the ties that have established between the participants of the projects through the mutual gardening, were intensified throughout the harvest party. The fact that so many participants joined us that evening showed us that there is a strong interest in getting together and the exchange we had intended,“ says Johanna, who lives in the neighbourhood herself.

To see the photo documentation of the „Grow Green project“ click to the left and right of the pictures underneath in the slider. The photos were taken by the kompass team. Used under exclusive licence to the EULe blog. All rights reserved. 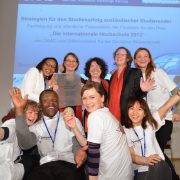 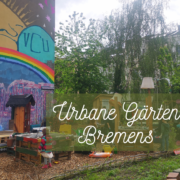